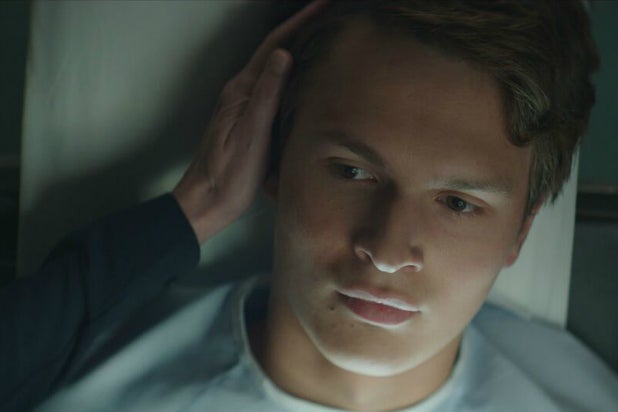 Ansel Elgort plays a dual role in “Jonathan,” but it takes quite a while before we learn just what the parameters of that dual role are. Every day, Elgort’s Jonathan watches a video message that was recorded by a guy who looks just like him. It would seem that these two are twin brothers, but the plot of this movie is much more convoluted than that.

“Jonathan” is a first narrative feature from director Bill Oliver, who co-wrote the script with Gregory Davis and Peter Nickowitz. It is filmed in a precise and organized and deliberately sterile way, with repeated shots of Elgort’s Jonathan preparing food in his Patrick Bateman-like apartment and going to work at an architecture firm, where he can only stay a set period of time.

Elgort’s Jonathan is a fussbudget in dorky clothes who wears his hair in an unflattering part, and he holds himself stiffly and disapprovingly. This is a contrast to his brother, who is not seen outside of a TV screen where Jonathan watches the messages they record for each other. It turns out that this brother’s name is John, and John is a much looser guy, more of a people person, and popular with women.

Oliver seems to be trying to get at an intriguing subject here: the way that personality and charisma can make someone socially successful regardless of looks. But this theme gets buried under a premise that proves very unwieldy. The first third of “Jonathan” goes by without any specific explanation about what is going on with these brothers and why they can only live during certain parts of the day. (Jonathan gets the daylight hours while John has to be the night owl.) This wait gets frustrating, and this frustration is not alleviated when the explanation finally comes.

John has been seeing a girl named Elena (Suki Waterhouse), even though the brothers have a rule that they are not supposed to have girlfriends. Jonathan is so curious about Elena that he makes contact with her during the day, and he finally tells her the full details of his situation.

It turns out that Jonathan and John share the same body, and there was even a third brother inside this one body when this three-personality baby was abandoned by its mother, but this third brother was terminated by Dr. Mina Nariman (Patricia Clarkson), who took charge of their development as children and still controls the situation via a chip she installed in their neck to keep their lives separate. By the time that Elgort explains the chip in his neck, “Jonathan” has gone from needlessly complicated to absurd.

Jonathan has sex for the first time with Elena, and at this point “Jonathan” feels like David Cronenberg’s “Dead Ringers” (1988) as performed by cute young high-school kids. “Dead Ringers” is a masterpiece, and so any film treading in the same territory is probably going to suffer by comparison, especially a movie like this, which is so scrupulously lacking in perversity and psychological detail.

Oliver makes sure that every scene in “Jonathan” is slow, earnest, tidy, and very cautious, and he pulls back from anything that might be too dramatic. In a crucial confrontation scene between Elgort and Clarkson, Oliver moves the camera steadily away from them, and this epitomizes his method here.

Clarkson can make just about any dialogue touching and believable just by lingering over it with that earthy voice of hers, but even she is tested by scenes where she is made to comfort Jonathan while seeming to pine for John. The direction this material should go is fairly obvious, but Oliver is too careful to really embrace the implications of what this story seems to want to be about.

“Jonathan” would be immeasurably improved if Oliver had really entered more wholeheartedly into “Dead Ringers” terrain and jettisoned Waterhouse’s sweet young Elena so that he could make Clarkson’s Dr. Mina the one who is sleeping with and toying with both brothers. (Just imagine the Freudian charge of that, and the way that the ever-naughty Clarkson might have carried it.) Instead, Oliver has opted for a very conventional film that relies far too much on its concept and far too little on character.