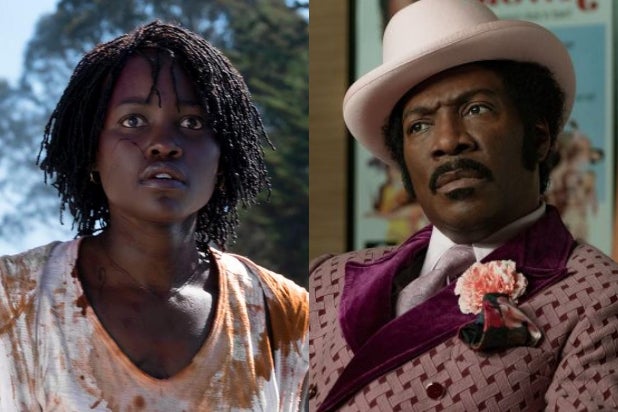 The African American Film Critics Association named Jordan Peele’s “Us” the best film of the year on Tuesday.

The group, which is the largest collection of black film critics from across the country and around the world, awarded “Us” with three honors in total, including best director for Jordan Peele and best actress for Lupita Nyong’o.

“Jordan Peele continued to raise the bar in horror specifically and film overall,” AAFCA president and co-founder Gil Robertson said in a statement. “With ‘Us,’ he once again upended the horror genre. His centering of a black nuclear family determined to survive in a complex storyline in a genre where black family units have historically been unseen is extraordinary.

Also Read: The Strange Story Behind 'I Got 5 on It,' the Secret Weapon of Jordan Peele's 'Us'

“He continues to push previously set boundaries with bold storylines that bring a refreshing perspective to cinema overall and the genre specifically,” Robertson continued. “The film’s $255 million global gross is yet another example that inclusive filmmaking resonates big at the box office and it also resonated critically with our members who awarded the film with our highest honors.”

The film was shut out of the Golden Globe nominations on Monday. The Hollywood Foreign Press Association announced it’s film and TV nominees to much criticism for a seemingly lack of diversity and equality.

“Our Best Actress winner, Lupita Nyong’o put her craft in high gear by serving up double duty as both the lead protagonist and nemesis in ‘Us.’ Already awed by her skill in previous films, ‘Us’ just put her over the top,” Robertson said. “Playing double duty allowed her to show even more range as an actor, putting her in an elite group of actresses who have helmed a successful box office film as the star. We are excited to see even more of her range in the future.”

One AAFCA award recipient that was also recognized by HFPA was Eddie Murphy for his starring role in Netflix’s “Dolemite is my Name,” who AAFCA awarded with best actor.

“We are thrilled to honor legend Eddie Murphy as Best Actor for his amazing portrayal in ‘Dolemite Is My Name,'” Robertson said. “He is an icon whose genius has often gone unrewarded by ‘traditional’ and we couldn’t be more pleased that he receives this honor while paying homage to Rudy Ray Moore, another icon.”

The 11th AAFCA Awards will be on Jan. 22 at the Taglyan Complex in Hollywood

In addition to the AAFCA Awards, the organization will present the women behind Focus Features’ box office hit “Harriet” with this year’s AAFCA Stanley Kramer Award for Social Justice.

The AAFCA Stanley Kramer Award for Social Justice recognizes filmmakers who work in the vein of Kramer who left a robust film legacy of such socially conscious films as “Guess Who’s Coming to Dinner,” “The Defiant Ones,” “Inherit the Wind” and “Judgment at Nuremberg,” challenging the critical social issues of the day. Previous winners include Quincy Jones, Rob Reiner and Sidney Poitier.