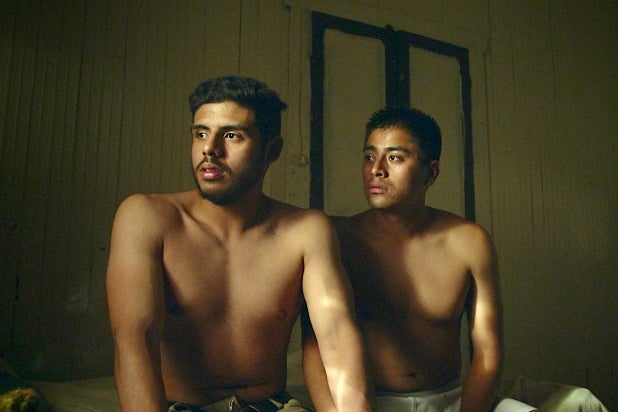 Precisely written and deliberately shot, “José,” a Guatemala-set LGBTQ character examination from Chinese-born director Li Cheng, is a movie preoccupied with the private tragedy of unfulfilled impulses and aspirations as a result of widespread homophobia and emotional blackmail.

Between his job flagging down cars to get costumers to eat at a shuco (Guatemalan-style hot dog) restaurant and helping his devoutly religious mother, 19-year-old José (Enrique Salanic) finds time to live out his sexuality in secret through dating-app hookups. We never see what’s on his cell phone’s screen, but we do witness clandestine meetings with men in dark rooms. Even as the sun shines outside, light barely penetrates the furtive interiors shrouded by thick shadows.

As if the camera is spying on José’s rendezvous, Cheng and cinematographer Paolo Giron always film him from afar, usually on the opposite side of the sidewalk as he waits for his next sexual partner or from high above, mimicking a surveillance camera. That noticeable distance they put between him and the lens heightens the protagonist’s internalized guilt. What he is doing is not accepted by this society, so he must not get caught. Extreme wide shots occasionally intensify this alienation.

Through his purposeful use of the space within the frame and Chen Yao’s rousing score, Cheng avoids turning in an utterly minimalist product. Though the acting benefits from the naturalness common in social-realist films, what encases the performances has a defined dramatic structure and isn’t shy about making the tools in use known.

There’s a shift, however, in José’s engagement with his desires and the visual language when he meets Luis (Manolo Herrera). Both are straight-acting, poor men who’ve built a wall between their real selves and who they should be that comes down only in private. Healing each other’s scars — those visible and the ones they carry hidden away in memory — José and Luis are happiest when together riding on a motorcycle or in motel rooms caressing each other’s skin.

With every kiss on the neck or touch of the hand, Cheng inserts muted sensuality to their love story. Interestingly, as opposed to numerous gay-themed features from Latin America, the catastrophic consequences for his characters are not physically violent during the time we spend with them. That’s not because hatred has subsided, but because the pair has learned to suppress in order to survive.

Detailing contrasting class levels within the same social justice problem in the same country, “José” is in direct conversation with Jayro Bustamante’s “Temblores” (“Tremors”). In the former, poverty and the responsibility he feels towards his mother (Ana Cecilia Mota) influence José’s decision to remain in the closet; in the latter, the protagonist is a white man from a wealthy family whose choice to come out costs him access to his children and his family’s acceptance. Religion as the major source for discrimination and condemnation — in addition to earthquakes serving as a plot point or narrative device in both — unites these two versions of being gay in Guatemala.

José’s reality includes daily rides on public transportation, for work or pleasure. Via the protagonist’s commute, the director notes the economic situation in the Central American nation, as well as the pervasive crime rate and the rundown buildings in the capital city. Showing it as part one part of the environment and not a defining trait of the place, Cheng dodges sensationalism, which is not always the case when outsiders come into a region to tell its stories. Just as some of José’s sexual partners share his background, there are also others more affluent who offer him an escape.

Salanic is blessed with a face that’s easy to read for signs of concrete emotion. At one point, José renounces his boyish features to foster archetypal manliness. A roughness gained from the heartbreak that’s visible in his eyes pairs with facial hair and the intent to develop muscles. The actor utters few words and doesn’t perform any outbursts; what’s required of him is an unfazed façade, even when his chances at happiness have vanished time and again. No tears leave his eyes, ever.

No one ever doubts José’s heterosexuality, but his mother knows and prays for him to return to the flock, and more importantly for him to never leave her side. Her manipulation disguised as pure love weighs heavy on her son, who has truncated his dreams for her sake. Their interactions are loving but aloof as if neither wants to discuss the truth because it’s much easier to ignore it. Furthermore, all conflict remains latent but never spoken out loud. There are no fights, a fact that some could read as a flaw because it robs the film of apparent catharsis.

Cheng’s screenplay denotes the passage of time and calls back to a fond evening illuminated by fireworks in an organic fashion, and whether it’s been a year or more that has gone by, the invariable tragedy is how the passage of time piles on the same unspoken sadness until José is free. “José” doesn’t give us a direct hint about his destiny, but if an open road means hope, then he has some.