Joseph Gatt, an actor with roles on “Game of Thrones” and “Star Trek Into Darkness,” was arrested in Los Angeles on suspicion of engaging in “online sexually explicit communication with a minor.”

Los Angeles police announced details of Gatt’s arrest in a news release and issued an urgent plea for other potential victims to contact authorities.

Gatt, 50, was taken into custody at his home in the Beverly Grove neighborhood of L.A. on April 6, by detectives from the department’s Internet Crimes Against Children Task Force, the LAPD said. However, police did not release the information until this week. 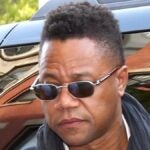 The LAPD said the arrest came after they received a tip that Gatt had allegedly communicated with a minor across state lines. The actor was arrested on a felony warrant for “contact with a minor for sexual offense,” police said. No other details about the alleged crime were released.

Gatt was released on $5,000 bail shortly after his arrest, according to the Los Angeles County Sheriff’s Department’s online inmate information center.

On Wednesday afternoon, he posted a statement on Twitter calling the allegations “horrifying and completely untrue.”

The actor said the LAPD’s details on the case are “100% categorically wrong and reckless,” adding that the police department’s news release contained “errors and misleading information.” Still, he said he is “cooperating fully with police” and working to clear his name.

Gatt is a busy character actor, with credits on a string of TV shows, including “NCIS: New Orleans,” “Z Nation,” “Lucky Man,” “Ray Donovan,” “The 100” and “Banshee,” according to his IMDb page. He also has a small role in the upcoming superhero film “Black Adam.”

Police urged anyone who may have been a victim to call detective Denos Amarantos at 562-624-4027. During non-business hours or on weekends, calls should be directed to 877-LAPD-247.

If you have knowledge of someone making inappropriate contact with a minor, or if you know of child sexual abuse material online, you are urged to contact local law enforcement or the National Center for Missing and Exploited Children at 1-800-THE-LOST (1-800-843-5678).