Set to premiere on Aug. 6, the series stars Gordon-Levitt as Josh Corman, “an artist at heart but not by trade,” according to Apple’s description. “A career in music hasn’t panned out, and he teaches fifth grade at a public school in the San Fernando Valley. His ex-fiancé Megan has moved out, and his high school buddy Victor has moved in. He knows he has a lot to be thankful for, but finds himself struggling nevertheless through anxiety, loneliness, and a sinking suspicion that he sucks as a person.”

The trailer showcases some of the series’ more surrealist elements, including a looming meteor hovering in the background and a “Doctor Strange”-esque sequence in which a punch from the Joker sends Gordon-Levitt flying into space. 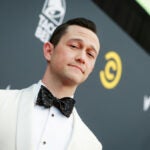 Gordon-Levitt is creator, director and executive producer on the series, which hails from A24. Bruce Eric Kaplan, Ravi Nandan and Inman Young also serve as executive producers, with Pamela Harvey-White producing.