In the official teaser trailer, which dropped on Wednesday, Brolin’s Wyoming rancher Royal Abbott says a highly unusual prayer at the dinner table: “Dear God … we ask that you show us the way here, because we’re in trouble. You made this crazy world, so maybe you can give us some sort of hint as to what you’re up to. Because I don’t have the first f—ing clue.”

The trailer, which brings the western setting of “Yellowstone” and the freaky “what the hell is happening?” vibe from “Yellowjackets,” shows glimpses of strange symbols, blood, a police chase, a dead bear and Lili Taylor seemingly communicating with an unseen entity, ends with Brolin screaming, “There is a great void!”

The series begins with the Abbott family dealing with the disappearance of daughter-in-law Rebecca. It’s described by the streamer as “a thrilling Western family saga with hints of wry humor and supernatural mystery,” with Royal facing off with both his flashy neighbor Tillerson (Will Patton of “Yellowstone”) and a mysterious black void that appears in his pasture after an untimely death in the community. 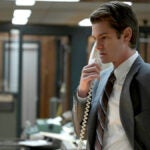