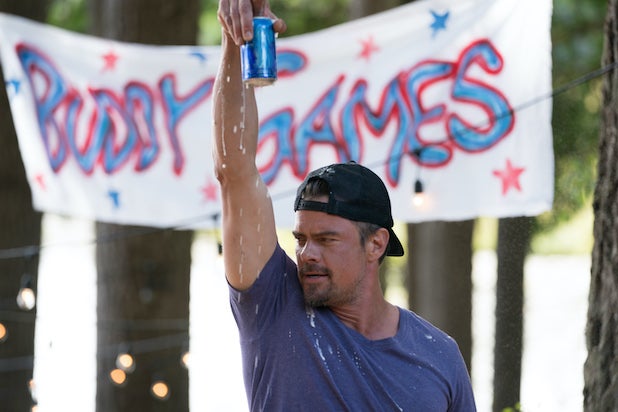 Saban Films has acquired the U.S. rights to “Buddy Games,” a comedy and the directorial debut from actor Josh Duhamel, the distributor announced Friday. A release date has not yet been announced.

“Buddy Games” is about a group of friends who reunite for a series of absurd physical and mental challenges and in the process heal old wounds, right past wrongs and figure out the true meaning of friendship…or die trying. Duhamel also stars in the film alongside Olivia Munn, Dax Shepard, Kevin Dillon, James Roday, Nick Swardson and Dan Bakkedahl.

“I set out to make a movie that I would want to see – something grounded but outrageous enough to shock audiences, and ultimately a story of friendship and camaraderie,” Duhamel said in a statement. “I’m grateful to Saban Films for giving us the perfect platform for audiences to see it.”

“Josh Duhamel has created a laugh-out-loud comedy,” Saban Films’ Bill Bromiley said in a statement. “We are thrilled to be collaborating with him on his directorial debut, which is a fresh and daring achievement.”

Michael J. Luisi produced “Buddy Games” alongside Duhamel and Jude Weng. Bill Bromiley and Jonathan Saba negotiated the deal for Saban Films along with attorney Matt Saver on behalf of the filmmakers.

Saban Films also recently acquired the Drew Barrymore film “The Stand-In” and an Alicia Silverstone wedding comedy called “Sister of the Groom.” Next up on the distributor’s slate is “The Silencing,” a crime thriller starring Nikolaj Coster-Waldau of “Game of Thrones.”

Duhamel is known for the “Transformers” franchise and recently starred in the series “Jupiter’s Legacy” and “Think Like a Dog.”