Joshua Newton, the producer and director of "Iron Cross," has sued Variety for fraud and breach of contract over a negative review of his film that he claims undermined a $400,000 advertising campaign orchestrated by the trade. Grilled by Sharon Waxman, he accuses Variety editor Tim Gray of lying, and says publisher Neil Stiles told him he planned to end all reviews in 2010. Asked for a response, Gray had no comment and Stiles did not respond to an email. 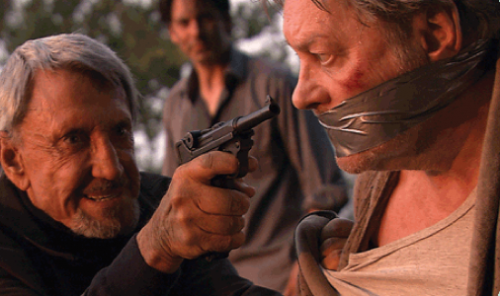 Most people think you’re crazy for suing Variety over a bad review.

I’m not suing them over a bad review. The problem we had was the timing. Robert Koehler, the critic, could have put it on his own website. If he’d have written it for TheWrap it would have just been one of those things. The problem was that Variety should have waited until the campaign was over. They completely destroyed the campaign that they sold us.

Explain how this campaign came about.

When the film was far from complete, they came to us. Roy died (of cancer) toward the end of filming and we had number of serious technical issues to deal with because of that.

So what happened with Variety?

A year after Roy died we held a Hollywood tribute with 200 guests at the Beverly Hills Hotel which was a fundraiser for multiple myeloma. We took out an ad for "Iron Cross" three weeks prior to the party.

I invited (Variety advertising executive) Dawn Allen. She came, she saw the trailer. And she invited me a couple of days later to be Neil Stiles’ guest, wtih my son and my girlriend, at Variety’s table at Britweek. I was placed next to Neil, I was his guest.  Neil was clearly doing his spiel, selling us what a fantastic magazine Variety is. Several weeks later Dawn Allen called and said we were on (editor) Tim Gray’s shortlist of Oscar contenders.

How do you think that happened? Had Tim Gray seen the film?

I hadn’t edited it yet. I hadn’t even cut the movie.

You were not suspicious at that point?

At the end of the day, whether one questions their motives or not, we knew we had a great movie. We didn’t have an OK film and someone talks you into the fact that it’s great. We knew we had a really good movie on our hands.

When I relayed this news to our backers in London, you can imagine the excitement they felt. We are aware of course that promotions play a huge, huge role in securing nominations. When they pitched us, it seemed plausible what they were pitching.

Did they ever make any representations about reviews?

No, not at all. They were so overwhelmingly positive about the film, it was inconceivable that we would be in this situation. 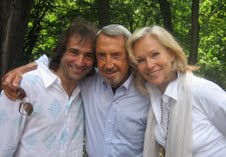 Although this is my first full-length feature, I’ve been in the business for over 20 years in England. We are aware that critics don’t review films until they are about to be released, unless it’s at festivals. From our point of view, the furthest thing on our minds is that we were going to have a review come out in Variety. (photo of Newton, Scheider and the actor’s wife, Brenda)

Did Robert Koehler review the film out of the Variety screening?

We had three fantastic screenings – Dawn was there, there were hugs all around. Robert Koehler didn’t go to any of these. He saw it at the Laemmle Sunset 5,  it was screened once a day for seven days – the audio was bad, picture was dim. That’s where Robert Koehler saw it.

So literally minutes after coming out of the Variety screening in San Francisco, I got a phone call from Michael Russell, my publicist. He said, "You’re not going to believe this, Variety has absolutely trashed the film." I drove all night from San Francisco to turn up at 9 a.m. at Neil Stiles’ office. He was incredibly embarrassed, I can’t tell you.

On the one hand he was apologetic. On the other hand, he said, "Josh, you’re putting too much importance on this review — no one takes these reviews seriously."

What does he mean by that?

He’s trashing his own critic. It gets worse — he said he had a problem with his critics. And he said he planned to cease all reviews this year, in 2010.

On the 21st of December between 9 and 10:30 a.m. I said, "Neil, this is completely damaging us." He said he’d see what he could do about the Internet and he’d cancel the review from the international edition.

Tim Gray then rang me the next day, we had a chat. I explained to him the predicament. In his defense, Tim did not take the review off because of the money we spent. He took it off because he was going to look into it. He said he’d give me until January 4 to get other reviews. I said that’s impossible.

Didn’t Tim Gray tell Patrick Goldstein and Gawker that he removed the review because of concerns it had errors?

Absolutely. He’s lying through his nose.

We cancelled the campaign, and at that point we were in discussions with Variety with attorneys as to a solution. Their response to my attorney was – "What have you been smoking?"

What did you expect of Tim Gray?

If he had any sense, Tim Gray would have said, "We did a campaign with them, but it has nothing to do with the fact that we disagree with the review." At least he’d have retained his integrity, but he didn’t.

Instead they saw (on Gawker) "Director threatens to sue Variety," and magically the next day they put the review back up. He told Patrick Goldstein that he had taken it down to investigate. That was two months ago. He’s a liar.

How much money is in the movie?

I can’t divulge the spend.

You’re in the right region.

And it looks it.

Do you believe that Variety’s editorial is for sale?

It’s not a question of whether Variety is for sale. Look at it from our backers’ point of view. They had dished out $266,000 because of a campaign induced by Variety. They created the Oscar buzz. They tempted us, induced us to spend this money, which went down the drain.

It’s very simple. Either we have an out-of-court settlement, or in court, the idea is to get our money back.

Do you think this has to do with Todd McCarthy being laid off?

Well, Neil said he’d end all reviews in 2010. If he’s sacking his critics and using freelancers, with freelancers making submissions, it’s easier for them to control.

You mean if they don’t like a review, they can reject it?