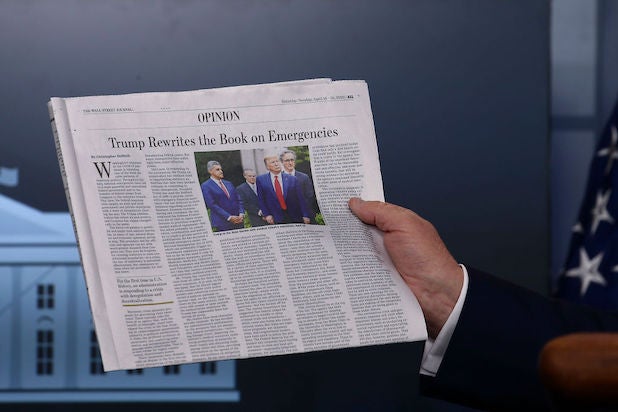 President Trump holds a copy of the Wall Street Journal during a press briefing in April. (Photo by Tasos Katopodis / Getty Images)

Over 500 journalists and media workers have died from COVID-19, according to a new study released Monday by the Poynter Institute.

According to the media-focused research organization,  the Press Emblem Campaign‘s obituary collection found that over 500 journalists in more than 57 countries have died from the virus that itself is one of the biggest news stories of the year.

“That number might seem small compared to the death total in the U.S. alone, which is now more than 300,000. But compare it to the number of journalists killed worldwide while doing their work or in retribution for that work. The Committee to Protect Journalists reports 30 journalists were killed in 2020,” Poynter’s Kristen Hare wrote in a reflection that appeared alongside the statistics.

Hare pointed out that 2020 was already disastrous for the news media industry in other ways. The coronavirus pandemic caused a significant number of newspaper closures, for instance, which she addressed in an interview with TheWrap earlier this year. And there have been widespread layoffs this year across the media sector as the pandemic has shrunk advertising revenue on which most outlets depend.

Some journalists and media employees who lost their lives amid the pandemic were honored by their employers. ABC News’ “Good Morning America” paid tribute to camera operator Tony Greer in April while Fox News internally memorialized video producer Rob Brown in October.