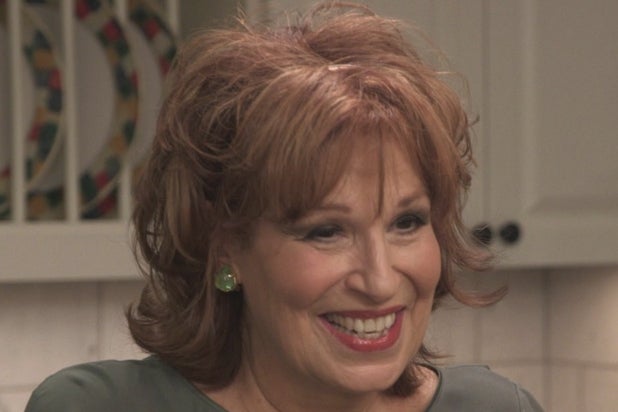 TLC’s “Late Night Joy” actually films in Behar’s New York City apartment, which is a mere five minutes away from ABC’s “The View” — her other gig. For a stand-up comic, Behar apparently hates traveling.

The comedian describes “Late Night Joy” as “eaves-dropping on girlfriends talking” — which she swears isn’t the same as “The View.” (She describes her main gig as “Girls, Interrupted.”) After all, no studio audience would fit in her two-bedroom pad.

A few people do, though. Her old pal Susie Essman (“Curb Your Enthusiasm”) was there for all fives episodes of a test run that premieres Wednesday night, and so were celebrity guests — Colin Quinn, Sherri Shepherd, Don Lemon and Wendy Williams — all booked directly from their host’s cell phone. Should the show get picked up by TLC, Behar is looking to flex that Rolodex a bit more.

With the exception of having to keep her apartment clean — “a bit of a nightmare,” she admits (her bedroom doubles as the green room) — Behar says “Late Night Joy” is “an easy-peasy job.”

It’s also one that came to her well before her return this season to “The View” was in the works. Behar recalled she wasn’t working much at the time and welcomed the idea, which came down from the very top of Discovery Communications.

“I was minding my own business, I was at a party somewhere, and (Discovery Communications CEO) David Zaslav said, ‘I want you on one of my networks,'” Behar recalled. That’s all it took.

Also Read: 'The View's' Joy Behar Warms Up to Donald Trump: 'The Guy Is Not as Bad as the Rest of Them' (Video)

Originally, the show was slated to focus on weight loss. But when those conversations devolved into topics like drinking, men, and sex, the 30-minute program evolved into a general gabfest.

Beyond Essman and the celebrity guests, Behar’s former assistant Jordana is also part of the on-camera conversation. The format will include some light-hearted games, as well as interstitials that Behar refers to as her “off-the-cuff remarks.”

As far as dream guests go, anyone who follows Behar on “The View” could have probably guessed hers: Democratic presidential candidate Bernie Sanders. “I think he would feel very comfortable in my apartment,” Behar said, with a laugh.

Behar has previously stated that she’s “aroused” by the man currently trailing Hillary Clinton in the polls. The comedian swears she’s not joking.

Also Read: 'The View's' Joy Behar Is Hot for Bernie Sanders: 'I Actually Am Aroused by Him' (Video)

Speaking of potential future leaders of the free world, “Late Night Joy” debuts two days before Behar and company welcome GOP candidate Carly Fiorina back to “The View.” That’s bound to be awkward, as the ladies have made unflattering comments about the former businesswoman’s face, saying it looks “demented” and “like a Halloween mask.”

Behar has high but realistic hopes for “Late Night Joy.” But should it be picked up — or even take off — she’s not ditching her day job again. So don’t fret, daytime fans.