In conversation with CBS late-night host Stephen Colbert, she said, “It doesn’t make sense to me why the folks at that particular network — which I think we all know who we mean — would want to kill their own viewers. Their viewers are older. Their viewers are more susceptible to COVID and I don’t understand what the point is of killing them.”

Reid was discussing what she sees as anti-vaccine messaging from some of Fox News’ hosts, who she says she’d “put any money on” being vaccinated themselves. 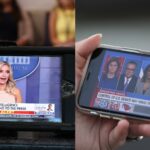 Her comments came on a day that numerous Fox News hosts — like Steve Doocy and Sean Hannity — openly encouraged their viewers to get vaccinated, though star host Tucker Carlson still sowed doubts about the vaccine on his own primetime show.

“If they’re telling you not to do it, you have to ask yourself why they don’t care about you and you’re their base. Again, the people who are saying this — what is in it for them, for their own people to die?” she asked.

Colbert questioned whether a coffin company is a top sponsor of Fox News, earning some laughs. Watch above, via CBS.