For fans of “Silver Linings Playbook” and “American Hustle,” part of what made those David O. Russell films so thrilling was the bravado of the writer-director’s storytelling skill. As the plots made bold shifts in tone and the characters uttered stylized yet thoroughly quotable dialogue, audiences often held their breath to see if the auteur could get to the finish line without having these brilliantly fragile creations collapse.

Russell hopes for a Jennifer Lawrence hat trick with “Joy,” but unfortunately, this time his delicate balloon pops. It’s a movie about a harried single mother rediscovering her creativity, and about the birth of QVC as the ultimate melding of retail and show biz, and about one brave person’s fight not to be exploited by the world of commerce, but Russell (who shares story credit with “Bridesmaids” co-writer Annie Mumolo) doesn’t quite figure out how to tell these stories concurrently, or even consecutively, resulting in a pile-up of characters and incidents and emotions that never satisfyingly coheres.

“Joy” is a biopic, but not in that “you wouldn’t believe this if it weren’t true” way as much as in a “no writer would jam together these events if they hadn’t actually transpired in some similar fashion” way. It’s the kind of movie where a narrator dies but still keeps narrating. One where pointless characters turn up to do and say the exact same thing in multiple scenes, while other characters are established only to be jettisoned. And one where it means nothing that our heroine hits rock bottom, because she fixes everything in the very next scene.

Lawrence stars as Joy Mangano, the inventor and entrepreneur whose gadgets and products are credited with putting home-shopping channels like QVC and HSN on the map. Hers is a quintessentially American success story; we first see her as a young girl, creating fanciful worlds out of nothing but paper, as her grandmother Mimi (Diane Ladd) tells little Joy that she is destined to do great things. 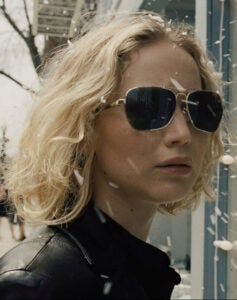 But then 17 years transpire in which dad Rudy (Robert De Niro) leaves the family for another woman, and mom Carrie (Virginia Madsen) takes to her bed and her soap operas. Despite being valedictorian of her high school class, Joy skips college to help her father’s sheet-metal business as an accountant, and she winds up marrying would-be singer Tony (Édgar Ramírez, “Zero Dark Thirty”), with whom she later has two kids.

On her very last nerve — Joy’s household contains the children, Carrie, Rudy (who moves back in after his girlfriend kicks him out) and Tony (still living in the basement after their divorce) — a mopping accident inspires Joy to invent the world’s first wring-less mop. It’s a great idea, but every step toward getting it produced and marketed is a hassle, from having to borrow money from Rudy’s new girlfriend Trudy (Isabella Rossellini) to enduring the haranguing of Joy’s bitter half-sister Peggy (Elisabeth Röhm, “American Hustle”).

See Video: Bradley Cooper Doesn't 'Know Anything' About 'Guardians of the Galaxy' or If He Just Spoiled the Sequel

A glimmer of hope comes when Joy meets QVC chief Neil Walker (Bradley Cooper), who imagines himself a mogul along the lines of David Selznick or Louis B. Mayer. The channel’s first presentation of Joy’s Miracle Mop flops when the on-air host doesn’t know how to use it, but after she convinces Walker to let her go on camera herself to demonstrate and sell the product, sales go through the roof.

More money means more problems, of course, as much for “Joy” as for Joy. When the character transitions from put-upon mom and daughter to determined entrepreneur and beyond, you can feel Russell grinding the gears. It’s only Lawrence’s massive charisma and empathy that makes this fictionalized version of Mangano seem real and relatable.

Certainly few other actresses could bridge two consecutive scenes where Joy first breaks down and decides that all her dreams were a waste of time, only to then, the next day, outsmart her competitor and strut down the street like the queen of the universe. (Whatever emotional transition Joy has here is reduced to an apparently empowering self-haircut.)

This hairpin turn is just one example of Russell zooming from one idea to the next in a way that reduces pretty much everyone in the movie — all of whom are based on real people, mind you — into bizarre ciphers who exist only to move the plot along. We spend several scenes getting to know Walker, for instance, only to have him abruptly disappear until the end of the movie, and we know that Tony has transitioned from selfish jerk to steadfast supporter only because the narrator tells us.

Russell and his art direction team present a more realistically subdued version of the 1970s and ’80s than the glorious caricatures of “American Hustle” — which makes sense, since these are working-class folk — but they do get to go wild with Carrie’s soaps, starring some familiar faces sporting wildly “Dynasty”-esque gowns.

This is a rare misstep for Russell, who in the past has sold us on all kinds of stories, whether they’re as indescribable as “I Heart Huckabee’s” or as traditional as “The Fighter.” Unlike his indefatigable heroine, however, Russell just can’t seem to close the deal on “Joy.”