TheWrap magazine: ”I didn’t know if I could lose a day of work to go meet these dudes, or if they even wanted to work with me,“ says the young Mexican actor

This story about Juan Daniel Garcia and “I’m No Longer Here” first appeared in the International Films Issue of TheWrap’s awards magazine.

The music was the thing that initially led director Fernando Frias de la Parra to make “I’m No Longer Here,” so it’s probably appropriate that he ended up with a musician, Juan Daniel Garcia, playing the lead role in his movie. The film begins in the Kolombia subculture in Monterrey, Mexico, with a gang known as Los Terkos who dance to a slowed-down version of cumbia music — a music that Frias had loved for years, as much for what it meant as how it sounded.

“I’ve always been a fan of countercultures,” Frias said, “and of spontaneity, appropriation, cultural accidents or even glitches, because they speak about the human condition. And I found a connection between the slowed-down cumbia and the fast expiration of youth in places where there are no opportunities.

“These kids, when they’re 16, they already have kids or they’re hooked on drugs or they’ve left school very, very young. And the music was a metaphor for knowing that there is no future. You want to hold on to the song and keep dancing for as long as you can, because that’s the joyful part of your life.”

To make his movie about a young member of Los Terkos who has to flee to the United States after witnessing a gang shooting, Frias turned to amateurs in Monterrey. A talent scout found Garcia through a youth group that was part of a crime prevention initiative, but the aspiring musician had little interest in acting.

“To be honest, I wasn’t sure I wanted to be a part of it at the beginning,” he said. “I was working as a musician, I was also working as a welder and it was going well. I didn’t know if I could lose a day of work to go meet these dudes, or if they even wanted to work with me.”

Still, he was intrigued, he said, because the movie was going to be filmed partly in Monterrey, and because it was about a gang organized around music. “It also didn’t matter if you weren’t an actor. It was actually an advantage if you weren’t.” 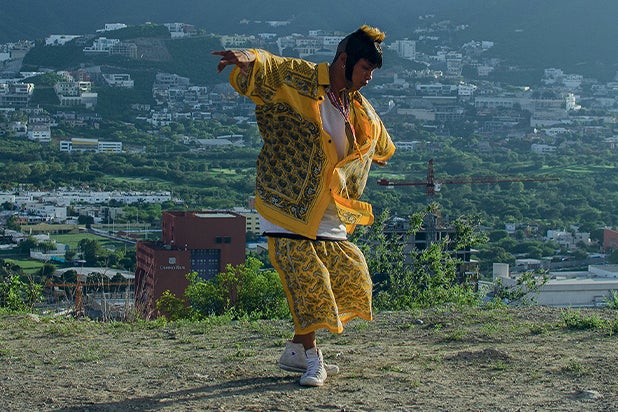 The more he learned about the character, Ulises, the more he connected with him — “because he is a guy like me who likes music, and because of the situation that young people face at the moment. I believe that he is a survivor of a complicated situation (in) an almost warlike environment, and I am living in an environment between music and cinema.”

Much of the film takes place in New York City, and for a while production stalled because the American consulate kept denying Garcia’s visa. “The U.S. Department of State had already approved Juan Daniel’s visa, he just needed to get it stamped in his passport,” Frias said. “He applied three times, and they denied him — and if you get a fourth ‘rejected,’ you cannot apply again for 10 years or something like that.

“And he was very much discriminated against — we got the transcripts of the interviews at the consulate, and they were trying to make him fail. By then we had won a lot of grants, and we had letters from important people in Mexico and in Congress, and finally, the fourth time, he got it.”

For Garcia, though, the challenges of playing a fanatic dancer were as much physical as diplomatic. “Both of my legs have been broken,” he said. “There were times when I was dancing, and it got to a point where I couldn’t anymore because they started hurting a lot.”

Still, the musician who didn’t care about acting came out of the experience ready to do it again. “I am a welder and I like photography as well,” he said. “If someone were to ask, ‘You have to choose one: musician, photographer, welder or actor?’ obviously, I would choose to be an actor, right? Because being an actor, I can be any of those things.”