Once the king of the R-rated comedy, Judd Apatow could use a hit — and Universal is hoping that it will be this weekend's "Get Him to the Greek."

For the better part of the last decade, Apatow was the most prolific producer/director of R-rated summer comedies in Hollywood, seemingly able to get a greenlight for just about anything he touched.

And amid an output volume that included no less than 10 films between 2005-2008, his batting average was solid, with films he produced during that span collectively grossing more than $1.5 billion worldwide.

Then, on the heels of two monster hits, 2007's "Superbad" and "Knocked Up," came the slide. The same year, "Walk Hard: The Dewey Cox Story" and "Drillbit Taylor" bit the dust. Only 2008's "Forgetting Sarah Marshall" showed the old Apatow spark.

His summer roll practically ground to a halt last year with the underperformance of the two summer comedies that bore his signature, "Year One" and "Funny People." 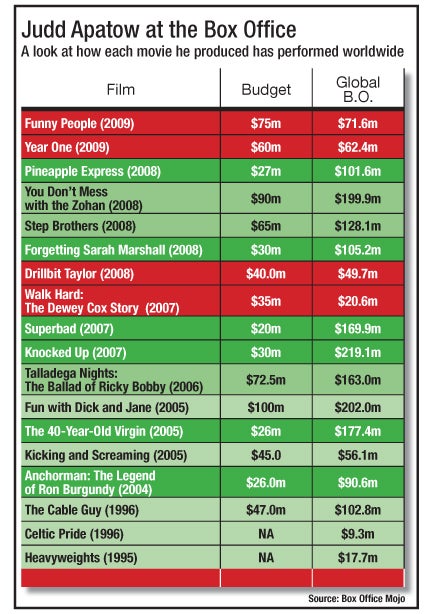 With Universal’s “Get Him to the Greek” premiering Friday, Apatow will seek to emerge from a  box-office slump.

Budgeted at $40 million, the film casts British comedian Russell Brand as Aldous Snow, the volatile, day-seizing English rocker he played in “Sarah Marshall.” Also back is “Sarah Marshall” director Nick Stoller and film co-writer Jason Segel. Launching at 2,695 theaters Friday with solid reviews and decent tracking, the R-rated summer comedy is well-reviewed (74 percent fresh) and projected to open to around $15 million this weekend.

Then, ironically for one of the busiest men in the movies, it's a bit of a dry spell, with only two movies definitely set for the next two years, both in pre-production: "Wanderlust" with Jennifer Aniston and "40-Year-Old Virgin's" Paul Rudd, directed and written by "Role Model's" David Wain, and a still-untitled Kristin Wiig project, directed by "Knocked Up" and "Dewey Cox's" Paul Feig.

The good news is that he still has one thing in his favor: the audience.

“The Apatow brand continues to have plenty of resonance,” said Vinnie Bruzzese, who heads movie research for OTX Research. "Particularly with his very dedicated fanbase.”

A success with "Get Him to the Greek" would go a long way toward keeping that resonance alive.