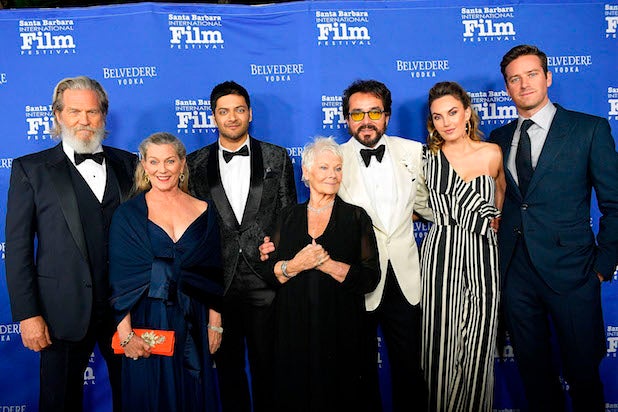 Dame Judi Dench received an award on Thursday night in Santa Barbara — and as she pointed out, it was a low-stress prize. After all, she journeyed to the coastal town north of Los Angeles knowing that she was this year’s recipient of the Santa Barbara International Film Festival’s annual Kirk Douglas Award for Excellence in Film, an annual honor that is handed out at a black-tie dinner that benefits the festival.

“It’s not like being nominated for something and then hearing them call another name,” she said with a grin. “You don’t have to put on that face and pretend to be happy that somebody else has won.”

Instead, Dench could bask in a low-key night at the Ritz-Carlton Bacara Santa Barbara resort, with speeches from actors Armie Hammer, Ali Fazal, Jeff Bridges and SBIFF Executive Director Roger Durling, along with lots of film clips.

She called the event “the best party I’ve ever been at,” and it taught us a few things about the iconic actress who is currently looking for her eighth Oscar nomination for her performance as Queen Victoria in Stephen Frear’s lighthearted period piece “Victoria & Abdul.”

Here are some things we learned, apart from main lesson of the night, which is that everybody loves Dame Judi Dench. (But then, we already knew that.)

1. She once made a movie called “Four in the Morning.”
Of course, we could have learned this by looking at her IMDb page. But each of the three to four dozen tables in the ballroom not only had a table number, it had the name of one of Dench’s movies — and given that she has been acting for 60 years, there were plenty of titles to go around.

So when you wind up sitting at Table 12, a.k.a. “Four in the Morning,” you’re tempted to look up the 1965 film directed by Anthony Simmons, in which Dench and Norman Rodway play a married couple who are somehow connected to a young woman who is found drowned in the Thames.

One quibble with the system of naming and numbering tables, though: If one of the tables is going to be named after the 2009 Rob Marshall musical “Nine,” why on earth would they give that name to table 11 rather than table 9?

2. She likes puppies.
Armie Hammer, who worked with Dench on “J. Edgar,” remembered that on the set of that movie, “she was one of the first people to hold our new puppy, Archie, and she refused to put him down for hours, while talking about his puppy breath.”

Dench neither confirmed nor denied this story when she spoke.

3. She’s wack.
Make that “she’s as wack as wack can be.” We learned this from Fazal, who co-stars with Dench in “Victoria & Abdul.” She plays Victoria. He plays Abdul.

4. She hates being called a national (or international) treasure.
Fazal said this, and so did Bridges. Apparently, she thinks national treasures are like rocks that you find on a shelf in a museum somewhere. She prefers to think of herself as “a jobbing actor.”

5. She gives sound advice.
When Fazal asked her about acting, he said, she gave him a simple prescription: “Learn your lines and don’t bump into the furniture.”

6. She can render the Dude almost speechless.
Before Jeff Bridges presented Dench with her award, he tried to explain just what she does that’s so impressive. It came out like this:

“We all have faces, but Judi’s face! And what she can do with it! I love that, Judi!”

9. She’s not a singer but it doesn’t matter.
According to Bridges, “Cabaret” composer John Kander once said that Dench, who starred in a West End production of the musical in 1968 despite the fact that she was not a trained singer, was the best Sally Bowles he had ever seen.

Also Read: National Board of Review Names 'The Post' the Year's Best Film

10. Her name can be a tongue-twister.
At least to Bridges it can. He stumbled a couple of times while trying to say “Dame Judi Dench” — and toward the end of his speech, he finally went all the way and blurted out what he’d been dreading all along, calling her “James Doody Dench.”

11. Kirk Douglas has a crush on her.
In a video message to Dench, Douglas, who shares her birthday of December 9 and in less than two weeks will turn 101, told her, “Don’t tell my wife, but I’ve had a crush on you for a long time.”

12. Douglas once made a Dench family vacation in Italy very happy.
In her speech, Dench recalled a vacation many years ago in a picturesque Italian town, where one day it began to rain. Stuck indoors, she and her family were at a loss for what to do — until they turned on the television set and found that Douglas’ 1958 film “Spartacus” was playing. Immediately, she said, the shut-in day became a pleasure.

13. She doesn’t like to see herself on screen.
In between thanking everybody who participated in the evening, Dench talked about the joy of acting — but she also mentioned “the hideousness of seeing it on a screen and knowing it’s too late to change.”