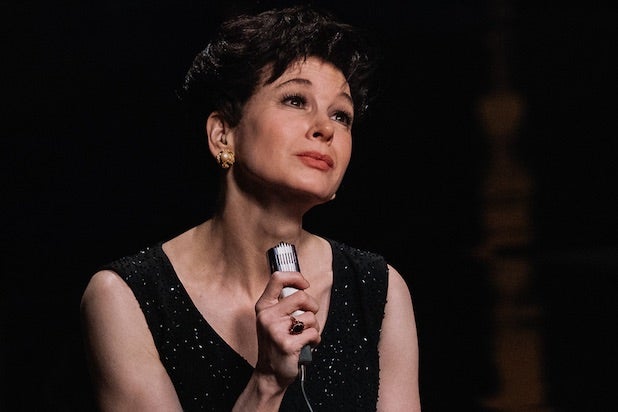 Director Rupert Goold’s “Judy,” which had its premiere at the Telluride Film Festival on Friday as part of a tribute to Renee Zellweger, contains what is easily the best performance of Zellweger’s career. The film itself works best as a showcase for the actress’ extraordinary turn, as she transforms herself into Judy Garland, focusing on the last performances of the singing legend’s career in the months leading up to her tragic death at the age of 47.

Zellweger has always been good — probably better than many of the roles she’s been given, especially the ones early in her career. In “Judy,” she gets to the core of Garland with a raw intensity of a woman in a spiral. Zellweger’s Judy seems to move through the film in a kind of trance, due in large part to the drugs and the booze, but also as someone who was chewed up and spit out by the Hollywood machine since her adolescence.

It has always been one of the saddest of Hollywood horror stories that Judy Garland was both Dorothy in the “The Wizard of Oz” and the kid to whom MGM was feeding speed and downers to keep her thin and working non-stop. She never had any kind of childhood or normal life to speak of. Some can survive it, others can’t. The sensitive ones like Garland are destroyed by it.

The film “Judy” takes us along for one last bumpy ride. It’s 1969, Judy’s money has run out, her third husband has taken custody of her two kids, and she’s invited to London for a series of performances at the Talk of the Town nightclub. Some of these performances can be seen on YouTube, and clearly Zellweger has been studying them very closely: It is sometimes impossible to tell the difference between the two.

On her way to marrying her fifth husband, the film watches as Judy falls apart. Even if those around her can occasionally get her on stage to sing, she often fails and walks off, as Garland did in real life. Zellweger’s Judy struggles with insomnia, tossing and turning. We flash back to Judy’s early days at MGM, where she repeatedly tried to escape a life of being a studio pony. The only thing Judy could hold onto was the love she received from her audience when she performed.

Zellweger captures Garland’s frail and slightly twitchy body, her voice, her look and mannerisms. Things as subtle as how Garland pronounces the word “wonderful” are not missed by the exacting Zellweger, who has brought the legend to vivid, full-color life. Even if she can’t quite match the beauty of that famous voice, Zellweger captures the spirit of how Garland sang.

Goold keeps the camera trained on Zellweger for nearly every frame of the movie, pulling very close to show how the dark red lipstick bleeds into the lines around her lips, or how badly her eyeliner has been painted on. Zellweger’s face turned out to be a perfect canvas to manifest Garland’s face. The “Chicago” star faced the same kind of cruelty recently in the form of comments aimed at how she was aging. We expect too much from our stars — we forget they are only human.

“Judy” isn’t a film that has much else going for it except that performance, though there is significant mention of Garland’s legacy with the LGBT community when Judy befriends a gay couple who wait outside the theater to meet her. The film is written by Tom Edge and based on the Peter Quilter’s 2005 play “End of the Rainbow,” which came to Broadway in 2012.

Zellweger likely lands in the Oscar race with this performance. It is not just the best thing she’s ever done but a tender, memorable realization of a star who once shined very brightly but whose light was never built to last.