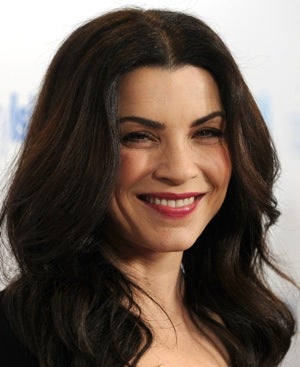 No one was more surprised that the CBS freshman drama "The Good Wife" became a hit than its star Julianna Margulies. With one season in the can, she's been rewarded with both a Golden Globe for Best Performance by an Actress in a Television Series and a Screen Actors Guild award for Best Performance by a Female Actor in a Drama Series. And not only is she expected to be nominated for an Emmy on July 9, but many critics already are promoting her as the favorite.
She talked to TheWrap about why she came back to television and her views on awards and the Emmy in particular.

Now that you have a successful TV show, is it still possible for you to do movies — you recently did "City Island"? And how do you feel about trying to do both?
For me it would be next to impossible to do during the season because I am the central character on the show. But offers did start to come in and I could have done a movie while on hiatus but I chose not too. I have a 2-year old son, and felt I should be home with him.

What was the movie?
I told my agent not to tell me.

You won an Emmy Award for Best Supporting Actress for your role on "ER" in 1995 and were nominated several times after that. Do you ever regret leaving the show while you were still at the top of your TV game?
No, never. Not once. It was the right decision at the time. I've had a great life and career since then and leaving the show afforded me other opportunities. I went right from "ER" to a TV mini-series. I've done other mini-series. I did "Scrubs," "The Sopranos," "Canterbury's Law." I've also done some movies. Maybe I wasn't on the highest radar, but I continued to do a lot of television. 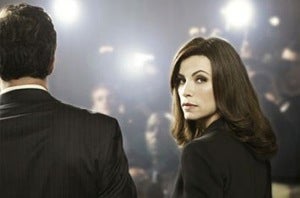 How did the role on "The Good Wife" come about?
When I decided to dive back into television, my manager thought from the script that it would be the best new show of the season. When I first saw the script, I couldn't believe CBS wanted to do this type of show. CBS is known for procedural dramas and this show wasn't a pure procedural. My first impression was that it will never be picked up. The pilot storyline was too ambiguous. And it was about a woman. CBS rarely invested in female lead characters. I was surprised they picked it up.

Did you think it would be a popular as it was, almost right from the start?
Never in a million years.

Why?
I thought it was too intelligent. I thought CBS would dumb it down. But they didn't.

What were your concerns before you took the role?
I wanted to make sure the writing held up. I talked to Ridley Scott (executive producer), who had worked before with CBS', doing "Numb3rs," and he assured me that it would and the network would support it.

You've already won both a Golden Globe and a Screen Actors Guild Award this year. What's your view on awards?
It's always nice to be recognized for what you do. I was particularly pleased with the SAG award because that one was from my peers. But the Golden Globe really helped the show. It premiered in London right after, and it gave some recognition there.

How do you feel as the favorite to win an Emmy in your category?
If that's what they're saying, it's lovely. It beats the alternative. But I don't read much of that stuff. I think ignorance is bliss.

How would winning another Emmy make you feel?
You want to win because you can publicly thank people who have meant so much to your career. But in the big scheme of things, we can't lose sight of what's really important. I didn't come up with a solution to ending world hunger. It's a lot of fun to walk away with the gold, but unlike the Olympics, it's a different type of competition.

What do you mean?
Well, you really can't compare performances by actors unless each one plays the same role. How can you compare Kyra Segwick's performance on "The Closer" with mine? If I win does it mean I'm better than her as an actor? No. The only way you can compare is if each actor gets up and plays the same character and does the same scene and then have people vote.

So you won't be disappointed if you don't win?
Richard Burton never won an Academy Award. Does that mean he wasn't a good actor?