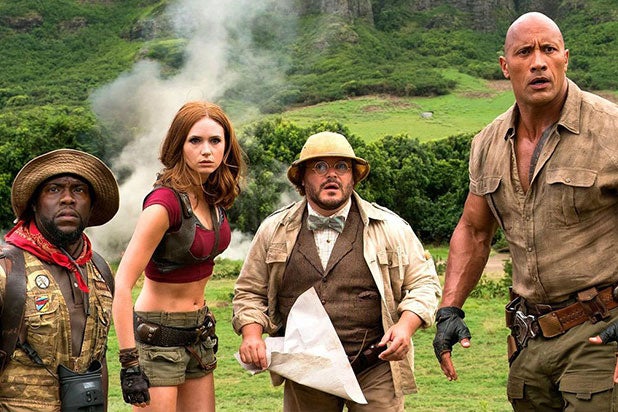 (Spoiler alert: Do not read on if you don’t want to know what happens in “Jumanji: The Next Level.”)

Jake Kasdan previously combed through the jungle of Jumanji with 2017’s “Jumanji: Welcome to the Jungle,” so the terrain is familiar, but one scene in the sequel, “The Next Level,” happens to be the “most complicated thing” he’s ever done.

“We were trying hard to kind of push everything to make the sequences more dynamic and dramatic and more complicated,” Kasdan told TheWrap. “All the technical aspects of it, we were determined to take what we learned from the first time and do something more, and do something new. So there are a lot of challenges that way. And the bridge scene, you know, was the most complicated thing I’ve ever done.”

Without giving too much away, in the scene, the crew, comprised of Dwayne Johnson, Jack Black, Kevin Hart, Karen Gillan and Awkwafina, has to get across a crevasse using bridges — but the bridges move, break and fall away. And all while being chased by Mandrills. Kasdan spelled out why that scene shot in Georgia was so tricky.

“The first movie was almost entirely on practical location,” Kasdan explained. “For this one, there was a little more stage work just by virtue of what was in the movie. We needed it to be more controllable than what you could get out in the world, but it was crucial that even as were doing that, we keep a lot of real stuff in the movie.”

He went on: “We went back to Hawaii, where we started it all. We went to New Mexico, in the Four Corners area; we were in far Southern California near the border of Mexico where we shot all that desert stuff, and then we went up to the mountains in Calgary, Canada, where we were shooting the snowy stuff. And then we shot in an incredible location outside of Calgary, which is Kananaskis, where they did a lot of ‘The Revenant.'”

In “Jumanji: Welcome to the Jungle,” there was a very obvious nod to Robin Williams’ film. When we meet Nick Jonas’ character Jefferson “Seaplane” McDonough, “Alan Parrish was here” is etched into a tree at his hideout. Alan Parrish, obviously, was the name of Williams’ character.

The sequel didn’t have a reference to the original as obvious as the first one — but if you look closely, you’ll notice one.

“You know, it’s within the context of we’re trying to protect stories,” Kasdan explained. “That being said, the woman that Danny DeVito is talking to at the end of the movie, Nora, she’s in the first movie and she’s sort of coming back in the same character that she was in the original movie. She played the kids’ aunt who brings them to Branford in the first place.”

Sounds good in theory, but in practice Kasdan discovered that it was a bit tricky linking up the two worlds. “The challenge is that the original ‘Jumanji’ kind of time warps itself out of existence at the end of the movie so that the events of that movie never happened, so it kind of has a ‘Back to the Future’ trick,” he said. “That makes it very hard to have threads from that movie continue into our movies, although it’s also important for us to try where we can to make that happen because we have a lot of reverence for that movie and I think it’s a stronger methodology if they do connect… That’s one of my favorite scenes in the movie.”

Another aspect he loved about the sequel was the fact that Johnson channels DeVito within the game, while Hart channels Glover… and hilarity ensues. Johnson and Hart worked tirelessly with the two Dannys to get their mannerisms down for continuity purposes.

“The key ingredient is that [Dwayne and Kevin are] both brilliant,” he said. “I think that’s because they’re the kind of movie stars that they are, and they are so charismatic — it’s easy to lose sight of the fact they’re both incredibly skilled. They worked on it with Danny and Danny, and they are in deep. They also had to make sure that the various actors who play the same character are all playing the same guy. There’s a first layer which is like, the voice and the physicality that ties to the actor in the real world. And then there’s making sure that we’re all building the same character together.”

Will there be a third (or fourth, if you once again count the original film) film? Kasdan is not sure — he never thought about doing a sequel to his first film, either.

“With the first one, I had been reticent about doing a sequel at all. The whole time we were making the first movie when occasionally it would come up, I was almost defiantly resisting conversation because it just felt to me like a mistake to be thinking that way when you’re making a first movie, in terms of just like, it’s bad mojo. But also, I didn’t want to leave anything to be resolved at a later date,” he said. “What was most important for me making the first movie was that it’d be a closed loop in that we tell that story as best as we could.”

He added: “My ambivalence about the whole sequel-ing process stemmed from the fact that I didn’t want to make the same movie again, 20 minutes later. So I said, if we’re going to do this again, we need to be doing something different and we have to find an idea that we can get as excited about as we were the first time. And luckily, I think the cast felt the same way.”