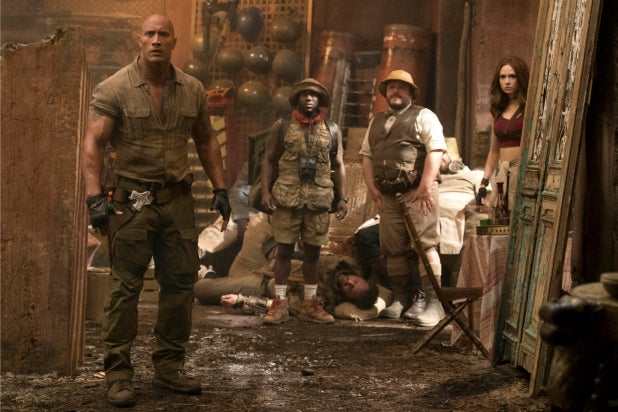 After three weekends on top of the charts and $555 million grossed domestically, “Star Wars: The Last Jedi” has ceded the top spot at this weekend’s box office to Sony’s “Jumanji: Welcome To The Jungle.”

With kids out of school and on winter break, “Jumanji” has proven to be a magnet for family audiences, who have shown up to see the Dwayne Johnson-fronted action comedy to the tune of $208 million domestic so far and is estimated to add $34 million this weekend from 3,801 screens.

It remains to be seen if “Jumanji” can hold that total through the rest of the weekend, as movie-going might be slowed by the winter storm that has engulfed much of the East Coast. However, a $34 million weekend would come close to matching the $36 million the film made on its first weekend, when numbers were weighed down by the usual lull in traffic on Christmas Eve.

“The Last Jedi,” which added $6.5 million on its fourth Friday, is currently estimated to make $24-25 million this weekend. Worldwide, the film has made $1.12 billion, but is underperforming in China against popular local fare like “Ex-Files: Return of the Exes.” Completing the top five are Fox/Chernin’s “The Greatest Showman” and Universal’s “Pitch Perfect 3,” which are respectively estimated to make $14 million and $10 million this weekend.

While “Insidious” was the only new release this weekend, STX expanded Aaron Sorkin’s “Molly’s Game” nationwide to 1,608 screens and made $2.3 million on Friday. The film is on pace to hit tracker expectations with a $6.8 million weekend, which would put it in seventh or eighth among all films.