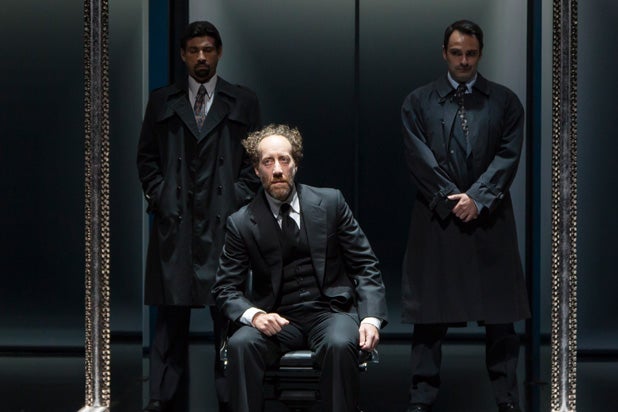 Timing can be everything in the theater. “M. Butterfly,” for example, won the Tony Award and played for nearly two years on Broadway after opening in 1987. Thirty years later, the current Broadway revival of David Henry Hwang’s drama doesn’t really fly despite two fine performances at the top. The transgender subject matter of “M. Butterfly” is now commonplace and the real-life events that inspired the story no longer feel immediate.

On Thursday, Lincoln Center Theater presented the world premiere of “Junk.” If Ayad Akhtar’s new play had been presented in 1989, after the arrests of Ivan Boesky and Michael Milken, it’s possible that “Junk” would have been a Tony contender and enjoyed a significant run.

Seeing it today, you have to roll up the nearest Playbill and scratch your head in wonderment at why the talented writer of “Disgraced” bothered with a subject that movies from “Margin Call” to “Wolf of Wall Street” to “The Big Short” have handled so much more effectively in recent years. Even a far weaker effort, like Oliver Stone’s “Wall Street,” had the advantage of a timely release date:  December 1987.

With “Junk,” you know you’re in for a long evening right from the get-go when an actor (Teresa Avia Lim) walks on stage to harangue us, face to face, about the evils of unbridled capitalism. Lim plays a journalist who has an affair with a business titan (Michael Siberry, so over the top he appears to be auditioning for the Big Apple Circus next door) because she needs a source close to an insider-trading scandal.

If Akhtar had followed this story, “Junk” might have been a guilty pleasure — junky, but fun to watch. Instead, he attempts to explain complicated business deals involving junk bonds and debt, and not for a moment does any actor on stage emerge as anything other than a pale avatar recycled from any of the movies mentioned above.

Akhtar’s main focus is a Boesky/Milken icon, and Steven Pasquale can be credited for not slicking back his hair in the style popularized by Michael Douglas in “Wall Street” and now seen on the head of Donald Trump Jr. Pasquale also manages to underplay his caricature, in contrast to many of the actors around him. Siberry is by far the most bullish in terms of overselling his role.

“Junk’s” penultimate scene hits a false note that overlooks all the investigative reporting on the topic in the last 30 years. This bottomless skepticism, however, is preferable to Akhtar’s occasional flair for the sentimental. In the second act of “Junk,” the owner of a steel company is on the verge of losing the family business, and to gin up sympathy for this billionaire character (Rick Holmes), Akhtar echoes a speech that Ina Balin gives to Paul Newman in “From the Terrace,” circa 1960, about the nobility of hard-working men who are happy to earn low wages in her father’s coal mines.

Doug Hughes’ direction takes its cue from the 2010 Broadway dud “Enron.” There’s a thumping rock score and shock sound effects (by Mark Bennett) to punctuate the many segues between scenes, as if the flashbulb lighting (by Ben Stanton) weren’t distracting enough. And no drama about Wall Street would be complete without all those ubiquitous and ever-changing stock-index figures (projections by 59 Productions) that often engulf the actors.

Long ago, the movies told us, “Greed is good.” In the theater, greed is now simply tedious.