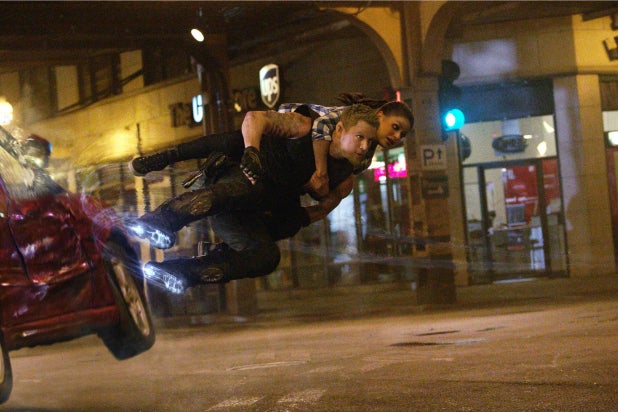 There is no “up” in space, and there is no “the top” over which The Wachowskis will not go in “Jupiter Ascending,” a sci-fi saga that’s convoluted and silly, yes, but also exciting and enthralling over the course of its two-hours-and-change running time. Inducing gasps and giggles in equal quantities, it’s a film better enjoyed not as “from the makers of ‘The Matrix’ and ‘Cloud Atlas’” but rather as “the most expensive movie Roger Corman never made.”

Trying to keep up with the plots, counter-plots, deceptions and shifting allegiances will make your head swim, but thankfully “Jupiter Ascending” boils down to good aliens and bad aliens, with no shortage of adrenaline-packed set pieces and intergalactic scenery that looks like it belongs on the side of a van. (And I mention both of these facets as selling points.)

Mila Kunis stars as Jupiter Jones, an undocumented alien born in a trunk: a steamer cargo hold, actually, as her Russian mother Aleksa (Maria Doyle Kennedy) fled to America after mobsters killed her British astronomer husband Maximilian (James D’Arcy). Working with her mother and aunt as a housekeeper, Jupiter laments her life of scrubbing toilets, splurging on the occasional big-ticket item as a way to find happiness.

Jupiter is far from your average human, however; turns out she’s a genetic Recurrence of space royalty, a millennia-old woman who left ownership of much of the universe divided between the three conniving Abrasax heirs: ambitious Balem (Eddie Redmayne, camping it up), devious Kalique (Tuppence Middleton), and hedonistic Titus (Douglas Booth, “Noah”). They all want to get their hands on mummy’s property, particularly a little planet called Earth, one that’s so overpopulated that its lifeforms are ripe for harvest in order to make the goo that keeps these interstellar point-one-percenters so young-looking after all these centuries.

The only hope for Jupiter’s — and humanity’s — survival is Caine Wise (Channing Tatum), a disgraced super-soldier with flying boots and strains of wolf DNA. He whisks Jupiter away from Titus’ minions (in a big battle sequence that includes a breathtaking dogfight over downtown Chicago) and teams up with fellow veteran Stinger Apini (Sean Bean) to help Jupiter reclaim her inheritance in relative safety.

There’s a lot of fighting and chasing and conniving and falling (Jupiter plummets from a whole lot of high places over the course of this 3D film), with the occasional break for pages of exposition or would-be laughs; the latter leads us to the movie’s clunkiest sequence, with Jupiter navigating alien bureaucracy to reclaim her possessions from a previous life. It’s an extended homage to “Brazil,” complete with reference to “27-B-stroke-6” and a Terry Gilliam cameo, and like the contemporary segment of “Cloud Atlas,” it’s a reminder that for all the Wachowskis’ many gifts as filmmakers, comedy isn’t necessarily high on the list.

But who cares if the story is occasionally impenetrable or if some gags land with a thud when the thrills and the eye candy keep coming at such a breathless pace? “Jupiter Ascending” doesn’t break the new ground that the Wachowskis have managed in the past — if anything is going to date films of the early 21st century to future audiences more than iPhone ringtones, it’s the overuse of blue and orange in action movies — but the film never slacks in its efforts to wow us. From that thrilling skirmish over the Windy City to an elaborate outer-space royal wedding (in which Kunis wears the nuttiest headdress this side of Elizabeth Taylor in “Boom!”), the movie wisely never stops long enough for us to ask too many questions.

Jupiter seems as confused as we are; she spends most of her time trying to figure out what’s going on, and as such, Kunis has to play reactively, having things explained to her when she’s not being rescued over and over. Still, the actress makes us believe in the character’s noble heritage (even Stinger’s honeybees acknowledge her royalty), and by the end of the movie, she’s allowed to make decisions (and kick enough ass) to establish herself as an engaging heroine.

Tatum’s role mostly comes down to stunts and smoldering, and he does both well, even while sporting pointy doggy ears and guyliner. The Wachowskis have cast an international ensemble of actors — including Gugu Mbatha-Raw (“Behind the Lights”), Nikki Amuka-Bird (“Luther”), and Doona Bae (“Cloud Atlas”) — as their aliens; their resonance relies upon how much of an impression they can make with a minute or two of screen time. Having seemingly borrowed a closetful of ensembles from Dame Shirley Bassey, Redmayne manages to steal all his scenes as the universe’s most petulant would-be landlord.

Ultimately, this all boils down to two questions: 1) Is “Jupiter Ascending” completely bananas? Absolutely. 2) Will you have fun watching it? As long as you’re OK with the answer to the first question, I don’t see why not.