I can eat a bag of Cheetos in one sitting, what’s your superpower? For The Flare II in “Jupiter’s Legacy,” it’s transforming into a mass of energy and flying. But for Tenika Davis, the actress who plays Petra Small and her alter ego The Flare II in the Netflix superhero series, finding inner strength off-screen wasn’t something that came easy.

“Growing up I always struggled with the color of my skin, and feeling somehow that it wasn’t beautiful or accepted,” Davis said. “I was that little girl hiding underneath a hoodie… afraid to show the world who I was inside, because I didn’t know whether I would be accepted.” It turns out, all Davis needed was a superhero.

As a fan of the “X-Men” film series, the former “Canada’s Next Top Model” contestant began looking to strong female characters like Storm and Mystique for inspiration, admiring their ability to manifest and embrace their strengths. Davis told WrapWomen that she saw herself in Mystique, who’s blue skin color was something that made her beautiful, rather than something that held her back. For Mystique it didn’t matter what she looked like, she still kicked-ass regardless. “Having examples of people who look like me out there, who are doing amazing things kind of really allowed me to be able stand up and feel more strength and power in my own skin,” she said. 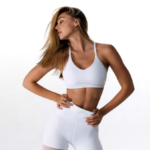 Although it took some time, Davis has finally found her inner superhero, using her platform and newfound confidence to inspire audiences, in the same way Strom and Mystique did for her. “Now, being one of those characters, I hope there is a generation that will look up to [me] and say… ‘I want to be like Petra, The Flair II… or one of the other characters that are diverse.’”

See WrapWomen’s full interview with Davis via the video up top.