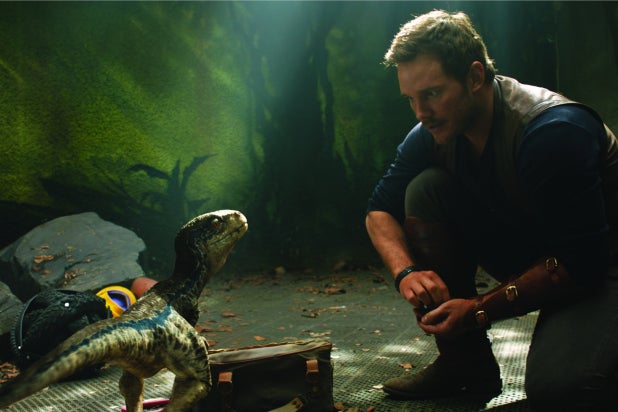 The major problem with “Jurassic World: Fallen Kingdom” — the fifth installment in this dinosaur series, and the second of a prospective trilogy — is that the makers treat the action and suspense sequences in the way most of us go to the dentist.

Director J. A. Bayona (“A Monster Calls”) goes through the motions of these scenes, even staging a “hiding from dinosaurs” set piece that was the most memorable section of Steven Spielberg’s original “Jurassic Park” movie from 1993. But what was exciting and scary then feels expected and very hackneyed now.

This new “Jurassic” begins with a tedious sequence set during a nighttime rainstorm where one of the dinosaurs wakes from its slumber to scare some men. This is shot and edited in such a sluggish way that it comes close to feeling inept, but mainly it suffers from lack of enthusiasm. (How hard is it to make running away from a rampaging dinosaur look at least a little exciting?)

The real story here begins with some exposition about the end of the first “Jurassic World” movie delivered by a female BBC reporter, who fills us in on the struggles of animal-rights activists who are working to save dinosaurs. We then see Jeff Goldblum, reprising his role from the first two films, addressing a committee. He tells them that he thinks the dinosaurs “should be taken out by the volcano” on an island that houses them, and Goldblum works hard to give this further plot exposition some urgency.

One of the dinosaur rights activists is played by Bryce Dallas Howard, who did a lot of fleeing in the previous “Jurassic World.” She goes to meet wealthy old Benjamin Lockwood (James Cromwell) and is met at the door of his house by a servant played by the great Geraldine Chaplin, daughter of Charlie and star of Carlos Saura’s “Cría Cuervos,” one of the best and most politically pointed films ever made. (She worked previously with Bayona in “The Orphanage” and “The Impossible.”)

Anyone who is aware of who Chaplin is and what she represents might be taken aback by the cutting between her very soulful, watchful visage and Howard’s beautiful, dutiful face. Howard does nothing in this movie but widen her eyes slightly and look blankly credulous. Chaplin stands very erect in all of her shots and looks like she is keeping a particularly juicy secret. Every time the camera cuts to her, she stops this movie cold and looks like she could lead us into another sort of story, a Gothic horror picture, maybe.

But Chaplin has been hired here for her gravitas and nothing else, even though a subplot pairs her with a young girl named Maisie (Isabella Sermon) and several promising moments between them seem to portend something else entirely; in “Cría Cuervos,” the main dynamic is between Chaplin and a very intense little girl played by Ana Torrent. (Couldn’t the third movie in this trilogy be a kind of “Cría Jurassic Cuervos”?)

Alas, we have to get back to the plot of “Jurassic World: Fallen Kingdom” instead, which hinges, as so many large studio movies do, on the evil of villainous capitalists who have no shame or moral scruples. These villains are poaching the dinosaurs and looking to sell them off for millions of dollars, and there’s also a plan to weaponize them for warfare, and so forth.

Chris Pratt returns as the leading man of this series, and everything he says tends to sound like a double entendre. “If I don’t make it back, remember, you’re the one who made me come,” Pratt tells Howard at one point, and he pauses just enough to get a laugh. When Howard is on top of a dinosaur and needs to sedate it with a needle, Pratt cries, “You’re going to have to jam it in there!” Pratt is a charismatic, good-looking, funny guy, and he might be a real star if he could only get one or two good roles and sever himself from lucrative formula junk like this.

The suspense scenes get particularly lazy toward the end of “Jurassic Park: Fallen Kingdom.” Young Maisie is being chased by a dinosaur, and she climbs into what looks like a dumbwaiter, but then she waits for the dinosaur to run down the hall at her and only closes the dumbwaiter when this creature is seconds away from biting her. The only reason she seems to be waiting so long to close the door is so that she (and the camera) can watch the dinosaur run down the hall.

At the end, Goldblum returns to sell us on the idea of a “Jurassic World,” but this very dull entry in the series doesn’t make this sound like an enticing prospect.

Mirror, mirror on the wall: Who is the most badass of them all?

Which character in "The Magnificent Seven" steals the show?