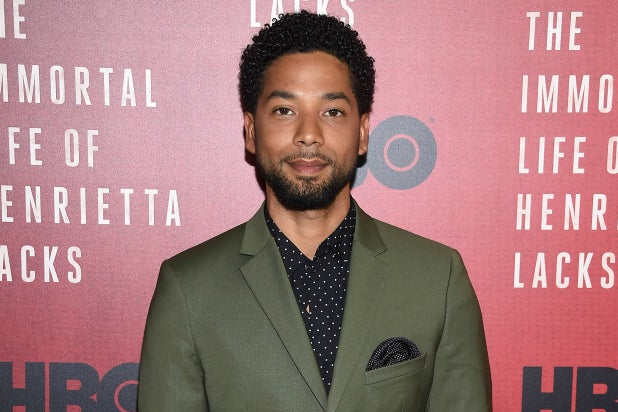 The Chicago Police Department has released photos from a surveillance video showing “potential persons of interest” in the Tuesday attack on “Empire” actor Jussie Smollett.

The photos, released Wednesday afternoon, show two silhouettes walking in the area of where Smollett was sometime between 1:30 a.m. and 1:45 a.m., but does not show the actual attack. Chicago police said they would like question the two people.

“Photos of people of interest who were in area of the alleged assault & battery of Empire cast member,” police spokesman Anthony Guglielmi tweeted. “While video does not capture an encounter, detectives are taking this development seriously & wish to question individuals as more cameras are being reviewed.”

Smollett was attacked at around 2 a.m. Tuesday in the city’s Streeterville neighborhood when he said two people began yelling racial and homophobic slurs at him. The “Empire” star told police that the attackers also yelled about “MAGA.”

In a statement Tuesday, Chicago PD said a “cast member from the Fox series ‘Empire’ was injured in what police called a ‘possible racially-charged assault and battery.'”

Police said Smollett then drove himself to Northwestern Hospital, where he was in good condition, a person with knowledge of the situation told TheWrap Tuesday evening.

Chicago police officer Michelle Tannehill told TheWrap that Smollett did not initially mention the attackers shouting about MAGA — an abbreviation of President Trump’s “Make American Great Again” slogan — but did bring up “MAGA” in a follow-up interview.

“When detectives followed up later in the day, he recalled the attackers making those remarks,” Tannehill said. She said she could not be more specific.

The case has brought an outpouring of love for Smollett and widespread condemnation of the attack. Some online have objected to the word “possible,” saying the hateful element of such a crime is obvious. But Tannehill said police routinely use the word “possible” in cases when the an investigation is not yet complete.

Smollett told Ellen DeGeneres on her show in 2015 that “there is without a doubt, no closet that I’ve ever been in, and I just wanted to make that clear.”

On “Empire,” he plays Jamal Lyon, a gay musician. Executive producer Danny Strong condemned the attack on Twitter on Tuesday, saying the “terror of racism and homophobia has no place in our society.”

Photos of people of interest who were in area of the alleged assault & battery of Empire cast member. While video does not capture an encounter, detectives are taking this development seriously & wish to question individuals as more cameras are being reviewed pic.twitter.com/xJDDygtocr

CASE UPDATE: Hours ago #ChicagoPolice detectives located a surveillance camera that shows potential persons of interest wanted for questioning in reference to the assault & battery of Empire actor. A community alert w/ photos is being constructed and will be disseminated shortly. pic.twitter.com/hu3HaPN5h1