Following the Jussie Smollett guilty verdict on Thursday, right-wing commentators are calling for President Joe Biden and Vice President Kamala Harris to denounce the former “Empire” star. The actor was found guilty of charges that he staged a hate-crime attack against himself nearly three years ago. He was charged with six counts of disorderly conduct. The jury voted to convict him on five of those counts.

Many of them based their call for a response from the president on a tweet he posted in 2019 which read “What happened today to @JussieSmollett must never be tolerated in this country. We must stand up and demand that we no longer give this hate safe harbor; that homophobia and racism have no place on our streets or in our hearts. We are with you, Jussie.” At the time, the New York Times and other major outlets were reporting that Smollett was “attacked” and the incident was being investigated as a potential hate crime. Biden’s tweet was a response to one such report from the Times.

Robert George, a professor at Princeton, tweeted, “President Biden? Vice President Harris? Speaker Pelosi? Leader Schumer? The rest of you? The verdict is in. No serious person contests it. We’ve all seen the evidence. You made claims–passionately–that have turned out to be spectacularly false. Yet you say … nothing?” 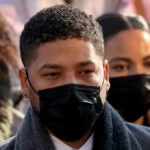 Fox News’ Howard Kurtz responded, “I agree they should address what became a spectacular and racially charged hoax.”

Former White House press secretary Sean Spicer tweeted that the Smollett verdict would be a “great” topic for journalists to bring up during Friday’s press briefing.

Conservative radio host Buck Sexton tweeted, “Jussie Smollett’s obvious hoax was an intelligence test that millions of liberals failed from day one- Including Biden and Kamala.”

GOP Rep. Lance Gooden weighed in, writing, “Jussie Smollett tried to start a race war with his “hate crime” hoax. Every Democrat politician, including Joe Biden and Kamala Harris, worked alongside the fake news media to spread that BIG LIE. Our country deserves better. Shame on everyone involved.”

The Democratic politicians weren’t the only ones to get slammed for having believed the initial reports and spoken out about them. ABC News’ Robin Roberts got some backlash for her exclusive sit-down with the actor, which took place in 2019, as did Elliot Page, who defended him vehemently at the time.