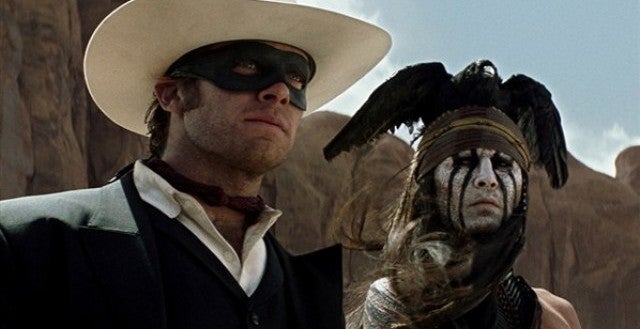 The mega-budget "The Lone Ranger" went down in a cloud of a dust in its box-office debut over the July 4 weekend, saddling the studio with a "John Carter”-sized disaster.

Over the five-day holiday weekend, the masked rider will have brought in around $49 million. That’s about $20 million under analysts’ projections and nearly $90 million behind the total of the No. 1 movie, Universal and Illumination Entertainment’s animated family film “Despicable Me 2.”

Worse, the $29.4 million three-day Friday-Sunday total for the $225 million adaptation of the classic radio and TV show, with Armie Hammer as the title character and Johnny Depp as Tonto, was weaker than that of last year's bomb "John Carter." That $250-million sci-fi adventure opened to $30.1 million, topped out at $73 million at the domestic box office and Disney wound up with a $200 million write down.

It’s hard to imagine Disney executives aren’t questioning the decision they made last summer to restart production on the Western after having shut it down when the budget began spiraling out of control.

“The Lone Ranger" marks the second consecutive major box-office misfire for Depp, who starred in last summer’s “Dark Shadows.” That send-up of a 1960s TV vampire soap cost $150 million to produce and topped out at $80 million. It opened to a mere $29 million — and "The Lone Ranger" did worse than that.

With Depp and the "Pirates of the Caribbean team of producer Jerry Bruckheimer and director Gore Verbinski on board, Disney had hoped “The Lone Ranger” could do for Westerns what that $3.7 billion four-film franchise had done for pirate movies.

That’s clearly not in the cards now. And to recoup that huge production budget – and the cost of a major marketing campaign – it would have to overperform abroad. Even with Depp, one of the world’s most bankable box-office stars, that’s an extremely long shot because Westerns don’t normally play strongly overseas.

“The frustrating part for us,” Disney’s head of distribution Dave Hollis told TheWrap Sunday, “is that we had all the ingredients here. You take a classic franchise, team the world’s most successful producer, an award-winning director and the biggest movie star in the world and you think your chances of success are pretty good. But we just didn’t make it work.”

And the belly-flop means it ranks with the biggest Western bombs of all time, such as “Wild, Wild West.” That was the 1999 Will Smith-Kevin Kline horse opera that opened to $27 million despite its $190 million budget, huge for that era.

But “The Lone Ranger” was always facing an uphill ride. The top debut ever for a live-action Western belongs to 2011's "Cowboys & Aliens" and that was just $36 million; with its $163 million budget, even that lost major money.

Disney’s marketing team knew all that and tried to position the film as an action epic rather than a Western based on a 50-year-old radio program. "They're on horses, but it's really an action film," was how one Disney executive characterized it early on in the campaign.

The audience skewed very much older – roughly 68 percent was over 25 years of age, and 24 percent was over 50, suggesting the problem was with the source material. Simply, young audiences weren’t interested in seeing a cowboy story, no matter who was in or made it.

Still, the limp “Ranger” showing wasn’t a total surprise. The critics hated it (24 percent positive on Rotten Tomatoes) and took the PG-13 film to task for being overly violent, which couldn’t have helped draw family crowds. Social-media signs and presale figures leading up to its opening were bleak, and “Despicable Me 2” was a juggernaut.