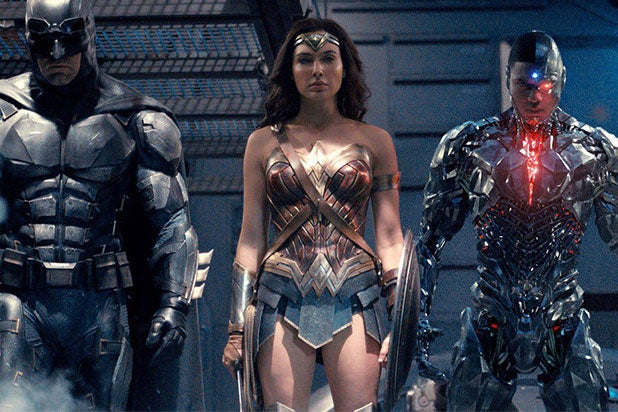 Only hours away from the first preview screenings, Rotten Tomatoes has released its score for “Justice League.” And while it’s better than “Suicide Squad” and “Batman v Superman,” it’s a long way from the highs of “Wonder Woman” — all DC Films distributed by Warner Bros.

The DC superhero team-up film is currently clocking at 40 percent with 150 reviews registered, compared to 26 and 27 percent for “BvS” and “Squad,” respectively. Critics have noted that director Zack Snyder has used a lighter tone than the morose clash between “Batman v Superman,” but criticized the film’s plot and overuse of CGI in action scenes.

“What the movie version of this cohort of superheroes will eventually become is anyone’s guess, but Snyder gives us far more set-up than payoff,” wrote TheWrap’s own Alonso Duralde. “And when he does finally get everyone together for the big battle, he once again drowns the proceedings in murk. Neither cinematographer Fabian Wagner  nor the army of digital post-production artists lets enough light into these proceedings.”

Reviews for the film began coming in overnight on Wednesday, but Rotten Tomatoes withheld its score until Thursday. A spokesperson for Rotten Tomatoes told TheWrap that each week, the Rotten Tomatoes team selects a movie or TV show to reveal the Tomatometer on its Facebook Watch show, “See It/Skip It.” Erik Davis, managing editor for RT’s parent company, Fandango, took to Twitter to corroborate that, writing that “it’s being held to debut on the new FB show, which airs the same time every week.” Rotten Tomatoes said in a statement that Warner Bros., which has an ownership stake in Fandango, did not have a hand in this decision.