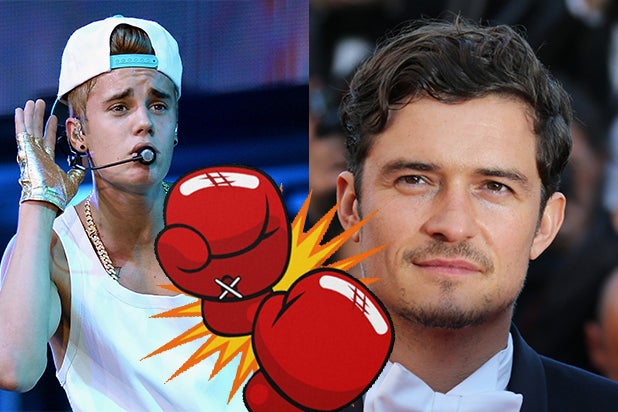 The pop star fired the most recent shot when he shared a caption-less photo of Bloom looking weepy on Instagram. Bieber eventually deleted the picture, but not before thousands of Beliebers “liked” it.

In case the rock you live under doesn’t have a strong wi-fi signal, here’s a recap of how this all started:

Cameras caught the 37-year-old actor, best known for playing an elf, accosted the 20-year-old singer, who once famously abandoned a monkey in Germany, in Ibiza late Tuesday evening. The footage shows Bloom approaching Bieber and lunging at him. Some outlets are speculating that the lunge occurred after Bieber made a sexual comment about Miranda Kerr, the actor’s ex-wife and baby mama.

Considering Bloom is deadly with a bow in five Middle Earth movies and scary with a sword in three “Pirates” films, his form was wholly disappointing. Furthermore, the actor is old enough to be Bieber’s father, which is why this replaces Kiefer Sutherland and Freddie Prinze Jr.’s “24”-gate as the most ridiculously intriguing feud of the week.

Belieb it or not, this Bloom-Bieber brouhaha quickly caught Hollywood’s attention.

Here is the picture the “Boyfriend” singer posted:

And here are Hollywood’s most entertaining tweets on the subject:

Orlando Bloom didn’t try to punch Bieber. It looks like he tried to flick him in the head. That’s way, WAY better.

This Justin Bieber/Orlando Bloom thing is the first time I’ve been interested in a featherweight match.

I’m sorry, who cares about Orlando Bloom and Justin Bieber getting in a “fight” lol let either of em serve in the… http://t.co/BDv2uPoLio

Some moron beats up his girlfriend and I lose a job. This just happened. Why do I bother waking up.

Also read: Justin Bieber to Be Charged With Misdemeanor Vandalism for Egging His Neighbor

Kerr hasn’t yet offered any comment, unless you count the topless photo the Victoria’s Secret Angel uploaded to Instagram. Adding fuel to the fire, perhaps?

Watch the video footage of Bieber and Bloom’s Spanish scrum: