Justin Bieber smashed a Spotify record with his latest single, “What Do You Mean?” on Thursday.

In the five-day period after the song’s release it was played on the streaming service more than 21 million times, besting the record previously held by One Direction’s latest, “Drag Me Down.”

“What Do You Mean?” also topped “Drag Me Down” as the fastest track in history to hit No. 1 on the iTunes singles chart.

Also read: Justin Bieber to Perform on 'Think It Up' Telecast

Much of the single’s success could be attributed to its heavy promotion and substantial social media buzz. Ahead of the song’s release last Friday, Bieber enlisted some celebrity friends to help him with promotion of the single on Twitter and Instagram

The singer posted photos of 72 singers, actors and models counting down the days until the single’s release. Miley Cyrus, Ben Stiller, Britney Spears and Will Ferrell were among those who participated in the month-long project.

Also read: Justin Bieber Gets Real With Jimmy Fallon About Why He Cried at MTV VMAs (Video)

Bieber later dropped the song’s music video on the same night that video of him breaking down in tears during the 2015 MTV Video Music Awards was going viral. In the three days since, it has accumulated more than 21 million views. The lyric video released with single currently sits at 25 million.

“What was so special about the emotional moment at the end, it was authentic and real,” he said of the breakdown on “Late Night With Jimmy Fallon” Wednesday.

See All 72 Stars Who Justin Bieber Recruited for Epic ‘What Do You Mean?’ Countdown: 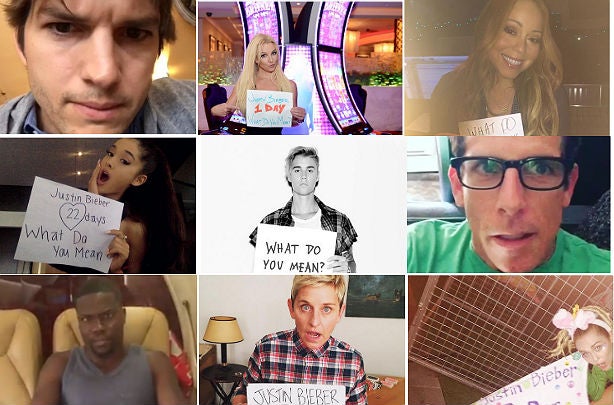