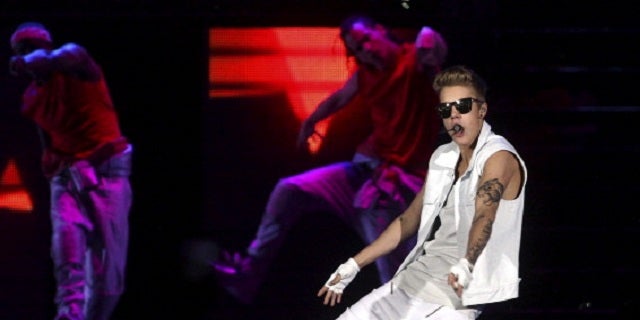 Justin Bieber is once again airing his thoughts on history-making figures. With about as much success as he did last time.

"Boyfriend" singer Bieber, who caught heat last month when he wondered whether Anne Frank would have been a fan of his, has now turned his gaze toward anti-apartheid hero Nelson Mandela.

Bieber, who played a show in the South African city of Cape Town on Wednesday, fired up his Twitter account on Thursday to say how impressed he was with the population — and, in particular, Mandela, who became the president of South Africa after decades of battling the country's racist apartheid system.

"Love to the Capetown fans," Bieber wrote in one tweet, along with a series of photos in which he poses with fans.

Shortly thereafter, Bieber shot off another tweet, this one reading, "Nelson Mandela is the man!"

Actually, it could be argued that Mandela has spent the majority of his life fighting the man…

That tweet was accompanied by the hashtag #BELIEVE, which is the name of his latest album and tour. Because what's the point of awkwardly praising a person who altered the course of history, if you can't work a little self-promotion in?

Bieber, 19, drew fire in April, when he visited the Anne Frank House museum in Amsterdam and wrote in the guestbook that he hoped Frank, who died in a Nazi concentration camp, "would have been a Belieber" — a slang term for fans of the singer.

"Truly inspiring to be able to come here. Anne was a great girl. Hopefully she would have been a Belieber," Bieber wrote.