“Dear White People” director Justin Simien is in talks to direct Disney’s “Haunted Mansion” movie, based on the theme park ride, according to an individual with knowledge of the project.

“Ghostbusters” and “The Heat” writer Katie Dippold wrote the most recent draft of the screenplay.

Dan Lin and Jonathan Elrich, who produced 2019’s billion-dollar-grossing “Aladdin” remake, are producing the film via their Rideback banner. 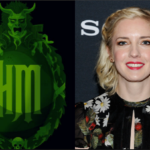 First launched as an attraction in 1969 at Disneyland, Haunted Mansion places riders inside “doom buggies” that take a tour of a haunted manor. A movie based on the attraction starring Eddie Murphy was released back in 2003.

Simien first broke out writing, directing and producing his critically acclaimed Sundance hit “Dear White People.” Netflix later adapted the film into a television series with Simien serving as the creator and executive producer. The fourth season of “Dear White People” is currently in production. Simien would soon follow with another Sundance hit, “Bad Hair,” which was acquired by Hulu and premiered on the streamer last October.

Justin Simien is repped by CAA and Grandview.