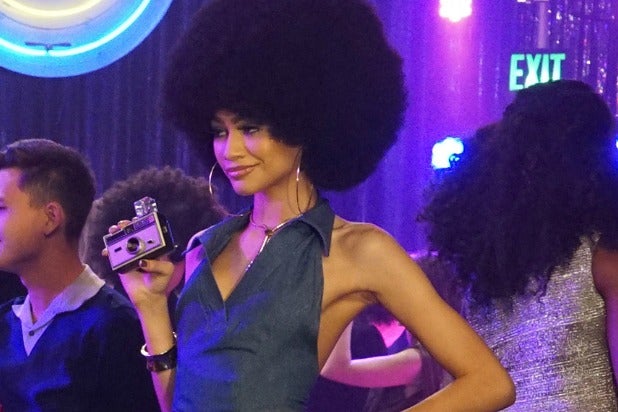 Zendaya is schooling “K.C. Undercover” fans with a special episode set in the 1970s.

The installment, titled “The Legend of Bad, Bad Cleo Brown,” airs Sunday on Disney Channel and kicks off with K.C. and Ernie’s grandmother teaching them about Cleo Brown, the first African-American female spy in the Organization where they work.

Although the tale is fictional, with Zendaya pulling double duty as Cleo, historical tidbits about Shirley Chisholm, a black politician and cultural pioneer, are also included. In 1972, Chisholm was the first woman to run for president as a Democratic candidate.

“The Cleo Brown episode is really important to me not only because it is empowering but it’s also very educational,” Zendaya, 19, told The Wrap. She is also a co-producer on the show. “Our young viewers will open their eyes and get a different perspective because it’s a little bit deeper than any episode we’ve done or that we’ve ever seen on the channel. It’s good for families and they will enjoy the deep content as well.”

Raynelle Swilling (“The Cleveland Show”), who co-wrote the episode with Teri Schaffer, is also proud of the installment’s message, which taps into Zendaya’s real-life social awareness and activism. Nzingha Stewart (“UnReal” and “The Fosters”) is directing.

“I just kept hearing and seeing all of these powerful, positive, self-confident things come out of Zendaya’s mouth, heart and finger tips (on Twitter),” Swilling said. “So I wanted to pitch an episode that reflected that. More often than not, we take our history for granted. We forget that someone had to make sacrifices to pave the path for us to be here today.”