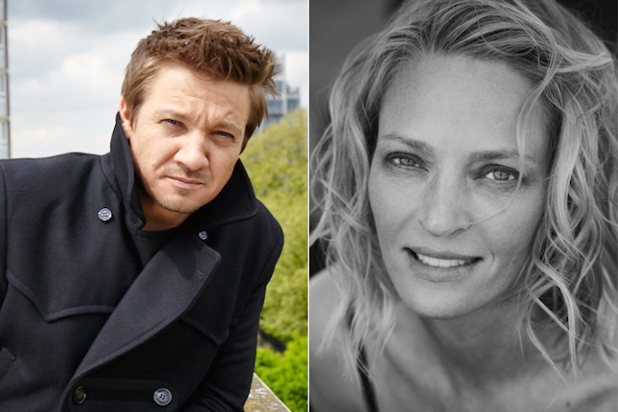 Both actors will be given Presidents Awards at the festival, one of the oldest and most important showcases for film in Central and Eastern Europe. KVIFF has been taking place since 1946 at a spa town outside of Prague in the Czech Republic.

Thurman, who recently served as president of the Un Certain Regard jury at Cannes, will be given her award by festival president Jiří Bartoška during the festival’s opening ceremony on June 30. The Oscar nominee for “Pulp Fiction” and Golden Globe winner for “Hysterical Blindness” is currently working on the comedy “The War With Grandpa” with Robert De Niro and Christopher Walken.

Renner will receive his award at the festival’s closing-night gala on July 8. Denis Villeneuve’s 2016 film “Arrival,” in which Renner co-stars with Amy Adams, will screen as part of that celebration. The two-time Oscar nominee will also introduce the upcoming Taylor Sheridan drama “Wind River,” for which he won raves at Sundance and Cannes, at Karlovy Vary.

The 2017 Karlovy Vary International Film Festival will open with “The Big Sick,” the acclaimed romantic comedy directed by Michael Showalter and starring Kumail Nanjiani and Zoe Kazan, from a deeply personal script by Nanjiani and his wife, Emily V. Gordon.