What’s a star from “The Grand Budapest Hotel” doing in a rotunda straight out of the movie? Tony Revolori – the delightful Zero in Wes Anderson‘s “Budapest” – is sunk deep in a plush armchair in a bar at the Grandhotel Pupp, a sprawling, ornate hotel that defines the resort town of Karlovy Vary.

Karlovy Vary? That’s a town west of Prague that is home to the largest film festival in Eastern and Central Europe, celebrating its 50th festival this year. The event gathers the elite of Eastern European filmmaking, the Czech upper class, political figures and hundreds of journalists from around the world. 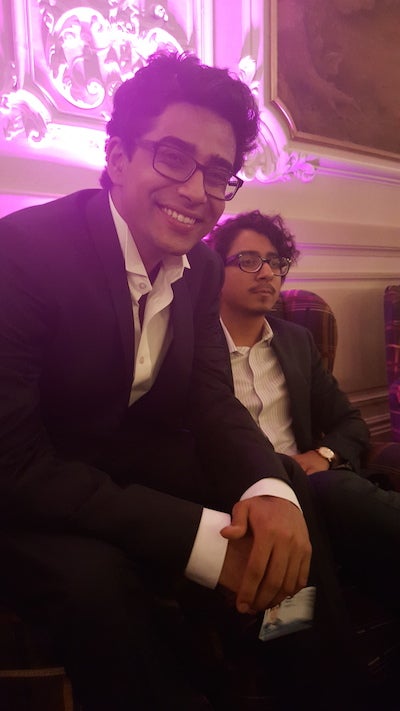 Also some film stars known to American audiences, like Revolori, 19, and Suraj Sharma, the now-22-year-old star of “Life of Pi.”

The festival’s inner circle hangs out here at the Pupp, dwarfed by the 30-foot-high ceiling in the bar, neo-Baroque moldings along the walls and a chandelier that’s about 10 feet in diameter. The Pupp was first founded in 1701 and has centuries of history that predates the invention of cinema and indeed the modern nation-state. It is said to be the inspiration for Anderson’s “Grand Budapest Hotel.”

Sharma and Revolori are here with their film, “Umrika,” which won the audience award for World Cinema in the drama category at Sundance earlier this year. It was late and their black ties were askew, but they were game to chat.

“Umrika,” Sharma explains, is about his character Ramakan “trying to win his mother’s love which he never feels he gets, because it all goes to his elder brother who has gone to America to work. And he sends letters … “

Revolori picks it up from there: ” … the whole village starts to admire these letters, and get a sense of America from what the brother is sending. They get immersed in American culture. And they start finding out certain facts aren’t true. And Ramakan gets sent on a journey to find out which facts are true.”

The movie doesn’t yet have U.S. distribution, but is doing the festival circuit.

Revolori, an American born of Guatemalan parents but with Italian, Hispanic, Native American and Jewish roots, broke out in “Budapest,” but has been acting since he was 2.

Revolori said, “‘The Grand Budapest Hotel’ was very different from here. It was inspired by the feel, but it was something else I was fortunate to see and feel and act in. It was a completely different environment, and nothing will ever match that.”

I ask Revolori if he is worried about finding roles, since his is not exactly a look out of central casting. He rises slightly out of his armchair and grows defiant:

“No. I will write my own roles, direct my own roles, do whatever I have to do to keep working. I will break the mold. I’m auditioning for a lot of prominent roles in huge movies, but a lot of times I hear from studios saying, ‘We want to go with someone peach-colored, or white,’ and it gets me down. But I’ll be the one. With one movie, one guy who takes a chance on me, I’ll keep going. “

It’s billed as the largest film festival in eastern and central Europe — and by the looks of the long lines and well-heeled attendees, it is. The fiftieth edition of the festival, which began in 1946 but was only held every other year for a stretch in its early years, has drawn the likes of Richard Gere, Harvey Keitel, Jena Malone and other stars.

The festival unwinds along the main street of picturesque Karlovy Vary, a Czech resort with a history that stretches back centuries thanks to hot springs that spurt upward from the middle of the river that flows through town. Visitors fill their cups with steaming mineral water that bubbles from public faucets fed from underground. The regular spring water tastes salty and has a slight fizz – and can be found in bottles everywhere. The water from the public faucets, on the other hand, is an acquired taste, though some swear by its medicinal properties.

Programmers bring in hundreds of films in a dozen different categories, everything from official competitions in features and documentaries to a section comprised of films that influenced top directors. A signature of the festival has previous honorees starring in humorous black-and-white trailers that screen before each competition film. (See the one starring Mel Gibson above.)

This is a national event, so everyone from Vaclav Havel’s widow Dagmar Havlova to the current Culture Minister and former prime minister are found darting their way from party to party. There is no film market but I found a surprisingly large number of leading Hollywood execs on hand – everyone from Glen Basner of FilmNation to folks from Anonymous Content and Endgame Entertainment.

Richard Gere in Time Out of Mind

Everyone who’s anyone ends up in the swanky basement Becher Bar at the Grandhotel Pupp, which serves food and pours Champagne to infectious dance music (does Abba qualify?) until 5 a.m. every morning. The Thermal Hotel, built concrete bunker-style in the Communist era, sits at the other end of town and hosts many other festival activities. 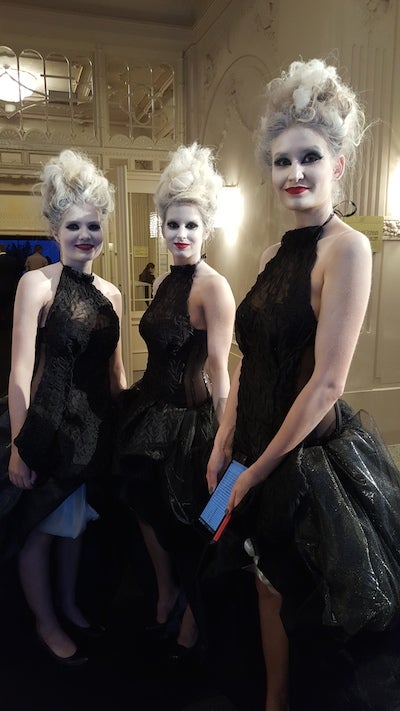 Oh yes, and money – there’s lots of that too. It turns out the Czech Republic has spawned a lot of successful capitalists in the past two decades, and many of them sponsor the festival. Their parties also stretch through the week, including a fashion show at the Moser factory and museum, maker of fine crystal, and a set of performances at a theater in the upper town where dancers moved through the audience and a singer sang “Hallelujah” accompanied by an art film, followed by a figure skater. That evening was sponsored by a local mogul worth $1.7 billion. Models greeted guests in gowns and powdered wigs a la pre-revolutionary France.

The American stars here take this all in along with many plates of roast duck and goulash and dumplings, the preferred dishes despite the 90-degree weather. Gere, downy-haired and 65, is doing press along with director Oren Moverman for the two-plus hour drama “Time Out of Mind” that previously screened at Toronto to not-great reviews, and is also screening “Franny,” a lighter drama also out this year.

The fans and the Czech press seem to love him, along with the homeless character he plays. The star is hounded by the paparazzi as if “Pretty Woman” were still in theaters and not just being screened outdoors here for 3,500 fans nostalgic for the romantic comedy. (The star was heard to say, “I want to take a picture of that and send it to Julia.”)

At 10 am on Sunday, a Pupp ballroom – its 18th century colonnades topped by cherubs blowing golden horns – is packed full of young people in t-shirts who’ve come to the premiere of “Heil.”

As in, Hitler. The film by Dietrich Brüggemann is a hilarious satire that sends up neo-Nazi culture in Germany, along with leftist dogmatism, politicians, journalists and sundry.

The film begins with a skinhead struggling to spell “White Power” correctly as he spray-paints on a wall (though it actually opens with swift images from World War Two, including a pile of dead bodies, and then cuts to “70 Years Later”), and sustains the irreverent tone throughout. The plot concerns a group of bumbling neo-Nazis who are focused on invading Poland, mainly to win the attention of a cute neo-Nazi blonde in their town. They adopt a more appealing media approach, Nazis plus a hipster look: Nipsters.

The young Czech audience got the humor, including a moment when the neo-Nazis have hijacked a car and hear the Beatles song “Hey Jude,” misreading it as “Hey Jews.” (‘Jude’ = Jews in German.)

At a Q&A after the film, director Brüggemann was asked how he dared to be so politically incorrect.

“It felt like someone removed the part of my brain that looks at what other people are doing,” he said. “The film is about narrow-minded people. We can hope that film can move the furniture around in your head – but mostly that’s an illusion. It’s just a comedy.”