Latin singer Karol G took a tumble down a flight of stairs on stage at her concert in Miami Friday night.

The Colombian-born performer, whose real name is Carolina Giraldo Navarro, was in concert at Miami’s FTX Arena when she twisted her ankle as she stepped down from a landing onto a flight of stairs. At first, she just fell on her side, but her body then somersaulted down the stairs, hitting her head in the process.

She landed facing the ground on her knees, hunched over and bracing herself with her hands, where she stayed for a heartbeat as one of her dancers raced to attend to her. But Karol G stood, shook it off, adjusted her hair and carried on with the show. 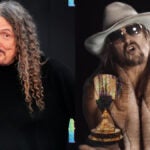 Later during the show, she told her audience, “I broke all my nails; I think I broke a knee.”

“You all think I’m going to fill this arena for the first time in my life–,” she paused, breaking down in tears, “I wanted this to be perfect.”

Her fans rallied around the singer, praising her for getting up post-fall and performing like nothing happened.