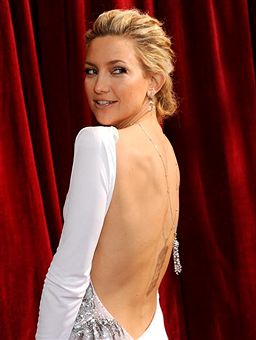 I’m not sure why "Bride Wars" star Kate Hudson wants to do another movie pertaining to impending nuptials, but her casting would be a major coup for "Something Borrowed," the Luke Greenfield-directed romantic comedy based on Emily Giffin’s 2005 chick lit novel.

The Oscar-nominated actress is in final talks to join Ginnifer Goodwin (HBO’s "Big Love") as a mild-mannered Manhattan attorney who becomes involved with her best friend’s fiancé following her 30th birthday, according to Variety. (Full disclosure: I used to be Greenfield’s intern.).

Hudson would play the best friend, Darcy, who is engaged to be married to dreamy Dex ("Melrose Place" hunk Colin Egglesfield).

I’m a huge fan of "Big Love" and continue to be impressed by Goodwin, who now holds her own against her formidable sister wives played by Jeanne Tripplehorn and Chloe Sevigny.

Goodwin recently toplined the ensemble-driven romantic comedy "He’s Just Not That Into You," but it’ll be nice to see her lead a film of her own, although Hudson remains the movie’s box office draw.

"Lipstick Jungle" writer Jennie Snyder Urman’s adapts Giffin’s bestselling book, which explores the stigma against single women in their 30s and the pressure society places on them to get married, while also addressing ethics pertaining to friendship and romance.

"Something Borrowed" may seem like an unlikely fit for Greenfield ("The Girl Next Door") but it’s right in his comedy wheelhouse. He first appeared on the Hollywood scene with his hilarious short "The Right Hook," which earned him a job directing Rob Schneider in "The Animal" for producers Adam Sandler and Jack Giarraputo of Happy Madison.

"The Animal" turned a tidy profit, and although "The Girl Next Door" didn’t follow the same box office trajectory, it performed very well on DVD and pay cable thanks to its unique mix of heart and hilarity.

Greenfield hasn’t directed a feature film since that underrated 2004 teen comedy, though he has worked steadily in TV (the CW’s "Aliens in America") and was responsible for developing the project that became Universal’s hit R-rated comedy "Role Models." I’m glad to see his "Girl Next Door" follow-up finally come to fruition.

Hudson was last seen belting out "Cinema Italiano" in the trailer for "Nine," since no one really saw the disappointing (both critically and financially) movie besides me and a few million fans of the musical. The "Almost Famous" ingenue next appears in "Earthbound," a romance starring Gael Garcia Bernal.