Kate Winslet will be leading and executive producing the new HBO limited series “The Palace,” from filmmaker Stephen Frears, who will also EP and helm the project.

The series’ official logline is as follows: “‘The Palace’ tells the story of one year within the walls of the palace of an authoritarian regime as it begins to unravel.” 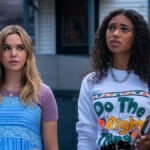 “We are honored to be working with this incredibly talented group of filmmakers on ‘The Palace,'” HBO executive vice president of programming Francesca Orsi said in a statement. “The notion that Kate Winslet and Stephen Frears, two of our industry’s leading lights (who — remarkably — have never collaborated before now), are joining forces to bring Will Tracy’s wildly original, prescient, and dazzling scripts to life at HBO is a dream come true for us.”

The Oscar-winning Winslet is returning to HBO after leading the critically acclaimed crime miniseries “Mare of Easttown,” for which she won an Emmy. “The Palace” will mark her fourth HBO limited series: In 2011, she won an Emmy for the cable network’s “Mildred Pierce.” Announced in late June, she will also be starring in and executive producing the upcoming HBO limited series, “Trust,” based on Hernan Diaz’s novel of the same name. In addition, the veteran actress is about to start filming the biopic “Lee,” based on the Vogue cover model-turned-photojournalist Lee Miller, which she is also producing.

Frears, an Oscar nominee, is best known for helming features like “Dangerous Liaisons,” “Philomena,” “Dirty Pretty Things,” “High Fidelity” and “The Queen.” In addition to “Succession,” Tracy is known for writing on “Last Week Tonight With John Oliver” (for which he won three Emmys) and “The Onion News Network.”