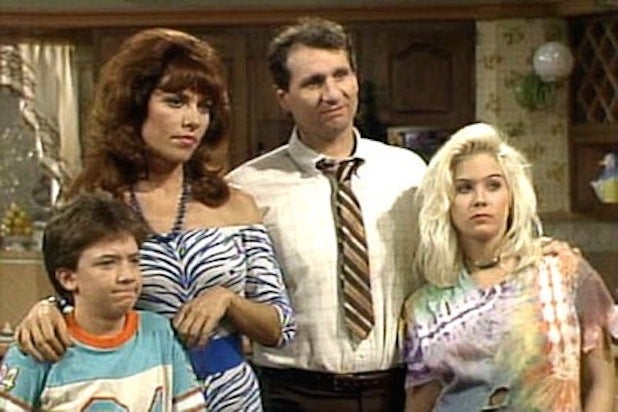 A Bundy family reunion may be more possible than ever.

David Faustino, who played youngest son Bud Bundy, has long spoken about his desire to do a spinoff/sequel series based on “Married With Children,” though Sony TV, who owns the rights to the intellectual property, have been more measured in their discussions about the possibility.

That may change now that the entire Bundy family seems game to return – nearly 20 years later and all of them more bankable than ever.

Katey Sagal told reporters after an event Friday to promote her new FX series “The Bastard Executioner” that she, Ed O’Neill and Christina Applegate have all been approached by Faustino to reprise their roles as Peggy, Al and Kelly, respectively.

“David approached me about and I said, ‘Anything, absolutely,'” Sagal said to SlashFilm, among other outlets present. “I think all three of us, Ed, Christina and myself all told David yes. It’s not really a reboot. It’s a continuation I think of Bud Bundy’s story.”

Sagal was also asked about a straight continuation of the story of the original Bundy story, though she seemed less keen on that possibility.

“I suppose there’s a certain value in rebooting some of that but I’m not quite sure what it is,” she said. “If you actually have a story to tell about those people… The only reason a ‘Married with Children’ reboot might make sense to me is it never really ended. So it might be nice to see it end. So I don’t know. I’m not sure how I feel about that. There’s so many original ideas.”

As for Peggy Bundy’s iconic big beehive of red hair, Sagal believes she would probably not have changed a thing in the nearly 20 years since “Married With Children” went off the air.

“They’re in a trailer somewhere,” she speculated on the current state of the Bundy family. “[Peggy] would probably have to wear that hair.”

“The Bastard Executioner” premieres with a two-hour opening episode on Sept 15 on FX.