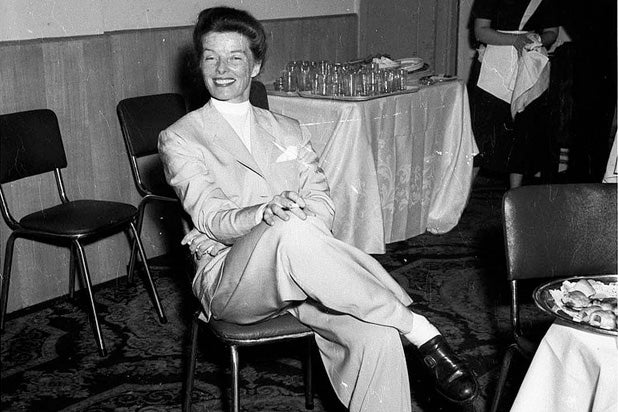 Legend has it that when the costume department at RKO stole her slacks (how uncouth!), Kate walked around the studio in her underwear, refusing to put her clothes on until she got her pants back. Kate’s pants became iconic, and in 1939, Vogue first featured women in pants. The rest, as they say, is history.

To me, Katharine Hepburn represents a true Hollywood original. Her career spanned over six decades, which is an amazing feat considering she was once considered untalented, shrill, and “box office poison.”

At the start of her career in New York City, she was fired from multiple productions. Still she carried on, determined. When offered her first film role, she asked for an unheard of $1,500 a week. After only 2 movie roles, she insisted she was born to play aspiring actress Eva Lovelace in “Morning Glory,” and ultimately won her first Academy Award for the role.

Her gumption gave her an unsavory reputation with the press, but she didn’t care. She was self-assured, independent, progressive and outspoken. She openly promoted birth control and abortion. She never had kids and didn’t feel it was necessary or appropriate to justify her decisions to anyone.

She fought for her career. She famously was refused the role of Scarlett O’Hara in “Gone With the Wind,” because, according to producer David O. Selznick, she had no sex appeal. No matter, she carried on.

Even after a slew of box office failures, again determined, she took matters into her own hands. She left Hollywood, looked for a stage project, and signed on to star in “The Philadelphia Story.” After its success, she acquired the film rights, bought out her contract with RKO Pictures and sold the film rights to MGM provided that she be the star. The film ended up becoming one of the biggest hits of 1940, and resulted in her third Academy Award nomination.

Until Meryl Streep, Kate held the record for Academy Award nominations with a whopping 12, and, became the first Oscar winner to become an Oscar-winning movie role (played by the equally fierce Cate Blanchett in “The Aviator”).

Katharine Hepburn made it OK for strong-willed women to appear on screen. She defied all the rules. She lived life on her own terms. She never gave up. And, with her pants-wearing, badass self, she made an intelligent, self-assured, stubborn, resourceful actress like me feel anything is possible if you work hard, lead with determination, and carry on.

As she once said, “I’m a legend because I’ve survived over a long period of time and still seem to be master of my fate — I’m still paddling the goddamned boat myself.”

From 'His Girl Friday' to 'The Heat': The Evolution of Female Comedies (Photos)

From Katherine Hepburn in "Bringing Up Baby" to Melissa McCarthy in "The Heat," here's a look at some of the greatest female characters in film history.

BRINGING UP BABY (1938) Take Katharine Hepburn as a dizzy free spirit with a hankering for a nebbish Cary Grant, mix in a leopard and sit back and watch a screwball comedy classic. Yet, the film was a box office disappointment when it was initially released and didn't get the critical acclaim it deserved until the 1950s. Talk about ahead of its time.
View In Gallery
BIO Melissa Center
Melissa is a Chicago native (Go Cubs!) and Northwestern graduate who produced, co-wrote, and starred in the 2017 independent feature "All I Want." Her other acting credits include "Grimm," "True Detective," "Grey's Anatomy" and "Masters of Sex." She previously originated a solo adaptation of Lois Lowry's "The Giver," toured with "A Chorus Line," and created/starred in web series "Missed Connections Live," a re-imagining of Craigslist Missed Connections.

Melissa is a Chicago native (Go Cubs!) and Northwestern graduate who produced, co-wrote, and starred in the 2017 independent feature "All I Want." Her other acting credits include "Grimm," "True Detective," "Grey's Anatomy" and "Masters of Sex." She previously originated a solo adaptation of Lois Lowry's "The Giver," toured with "A Chorus Line," and created/starred in web series "Missed Connections Live," a re-imagining of Craigslist Missed Connections.