“It’s been exhilarating and gratifying and thrilling and extremely surprising,” said the director of the year on Monday night at the Santa Barbara International Film Festival, where Kathryn Bigelow received yet another accolade and an evening dedicated not just to “The Hurt Locker,” but to her entire body of work.

“This is a tough little war film about an extremely unpopular war,” she said. “How does one anticipate something like this, that putting a magnifying lens on a hellish situation would touch some kind of nerve?”

In a wide-ranging conversation with festival executive director Roger Durling, after which she was presented with the festival’s Outstanding Director of the Year award by film director Andy Davis (below right), the DGA winner and perceived Oscar frontrunner downplayed perceptions that “The Hurt Locker” is completely apolitical, saying “I think war is by nature political” and calling the film “a personal response to a conflict that I felt deplorable.” 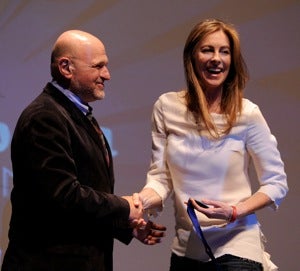 She talked more about that film, including how one of her first meetings after Mark Boal completed the script was with sound designer Paul Ottoson, because sound was so crucial to the impact of the movie.

But the part of the evening that the relentlessly gracious Bigelow hasn’t done dozens of times this award season was her trip through her past films – which, Durling commented, showed many of the “themes and fetishes” that she still displays in “The Hurt Locker.”

What became clear was just how much even her genre exercises like “Near Dark” (a vampire Western) are grounded in careful thought; Bigelow studied the visual arts and was a painter when she started making movies, so a biker movie like “The Loveless” refers not so much to old Roger Corman flicks as to French novels, the work of transgressive filmmakers like Kenneth Anger and Pier Pasolini, and the dynamics of power strategies.

Her basic approach in making that low-budget film, she said, was “extending the narrative to the point where it was almost nonexistent.” But then, lest she get too theoretical on us, she told an anecdote about Willem Dafoe crashing a vintage motorcycle into the front porch of some poor woman’s house in Georgia.

Running themes included the difficulty of getting her projects made (executives wanted Americans in “K-19: The Widowmaker” and a male leading character in “Blue Steel,” which completely misses the point of both movies), and her attraction to the pull between order and anarchy.

When Durling showed the clip of a Keanu Reeves/Patrick Swayze chase scene from the cult classic "Point Break," Bigelow talked of her delight at finding a small camera that enabled the cameraman to run at full speed to achieve her characteristic point-of-view shots, and of how Swayze helped her get around a nervous insurance company by inviting her along when he went skydiving on his day off … while wearing his character’s wardrobe.

Oh, and she summarily dismissed the media’s fixation on the Oscar “battle of the exes” between herself and James Cameron: “They just don’t have anything else to write about,” she said with a shrug.

In the end, Bigelow came across as a smart, thoughtful filmmaker appreciative of a spotlight she didn’t expect, and increasingly at ease with the demands of an awards season that requires a lot but has given her some real dividends, and will likely give her a few more on March 7.

“I like the art world, and I wouldn’t want to call it elitist,” she said of the form in which she started. “But it’s not populist. Film is a populist art, and I love how it crosses all cultural lines.”