“It’s a process,” said Kathryn Bigelow with a smile and a sigh, leaning against a wall inside the Directors Guild Theater on Thursday night. “It is a process.”

By it, Bigelow was referring to the Oscar Campaign, a seemingly endless string of Q&As and meet ‘n’ greets that can drive the strongest filmmaker to the edge of exhaustion.

But when you’ve made one of the best films of the year, as she certainly has with “The Hurt Locker” … and when you’re considered a frontrunner on the verge of what could be a truly historic Oscar victory … and when your movie is a small, risky indie that deserves a wider audience … and when people constantly want to talk to you, and show your films, and applaud your accomplishments … when all of that is happening, what’s a filmmaker to do but submit to the process? 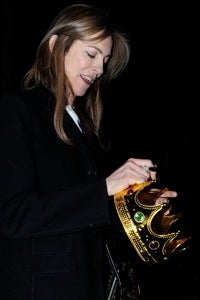 So that’s what Bigelow has been doing, with what seems to be equal parts grace and stamina. Her week started with a panel and a tribute at the Santa Barbara International Film Festival, where she recapped her career and was given a crown that made her, said moderator Peter Bart, “the king and queen of directors.” (Photo, left, by Michael Buckner/Getty Images.)

And then, a few days and quite a few events later, she came to the DGA on Thursday night for the latest in the “Behind Closed Doors” series of interviews hosted by BAFTA/LA, the local arm of the British Academy of Film and Television Arts.

The conversation with BAFTA’s Peter Morris covered her entire career, beginning with her days as an art student in New York in the mid-1970s, and her move into film after working with the pioneering British conceptual art collective Art & Language.

“I was completely, absolutely drowning in the non-narrative visual world, and obsessed with art,” she said. “ … I had to make a real paradigm shift to embrace the narrative.”

The tour through her life and career was a fascinating mix of philosophy and practicality, anecdotes and analysis. Among the highlights:

Her interest in film, she said, began with transgressive European filmmakers like Passolini and Fassbinder and moved through American B-movie directors of the ‘50s, and then to the likes of Sam Fuller, Sergio Leone and Sam Peckinpah.

As an exercise in learning narrative, she adapted novels (Patricia Highsmith gave her a free option on “Enough Rope,” which she wrote but couldn’t finance), and even wrote an episode of the TV series “The Equalizer.”

She also acted in the experimental film “Burn in Flames” by Lizzie Borden. And no, she has no ambitions to ever act again.

She finds the casting of small parts to be as important as casting the leads, “because you can really let your leads down if you cast somebody who can’t keep up with them.”

She’s never made a movie for a major studio: “They’ve all been independent.”

Although Charlie Sheen had originally been attached to the film, she was determined to cast Keanu Reeves in “Point Break” after seeing a screening of “Bill and Ted’s Excellent Adventure.” Producer Larry Gordon was incredulous when she told him she wanted Reeves: “Based on what?”

She also had trouble selling backers on the idea of using Ralph Fiennes in the lead of “Strange Days,” because “Schindler’s List” had not yet been released and nobody knew who Fiennes was.

She was disappointed by the tepid boxoffice performance of “K-19: The Widowmaker,” about a nuclear incident narrowly averted by a Soviet submarine crew in 1961, but said a screening of the film in St. Petersburg, Russia was one of the highlights of her career.

While she didn’t make any movies between 2002 and 2005, when she started developing “The Hurt Locker” with screenwriter Mark Boal, “I wasn’t just eating bon-bons and reading magazines.” (She worked in television, among other things.)

She likes “provocative characters who find themselves in extreme situations.”

She and Boal set a series of parameters when they were selling “The Hurt Locker”: the film had to shoot in the Middle East; the three lead actors had to be unknowns; there could be no creative interference; and Bigelow had to receive final cut.

Her biggest problem shooting the film in Jordan was obtaining “black powder” for the explosions. The father of the young actor who played the character of Beckham was an actual arms dealer, so she considered going through him; in the nick of time, though the Jordanian military decided the filmmakers were telling the truth about why they wanted the powder, and came through with as much as they needed.

When asked why both anti-war and pro-war viewers have embraced the film, she pointed to the fact that it’s a character study, “and that is perhaps where all political affiliations can meet.” But she made her stance clear: “I see it as a pretty graphic depiction of the tragedy of war.”

Afterwards, she stopped by a BAFTA reception for a while before heading out.

A few moments of rest awaited … and then, no doubt, the campaign trail.