Kathryn Bigelow added another huge victory on her road to the Oscars on Saturday night, becoming the first woman to ever win the Directors Guild of America award for feature film.

Bigelow’s film “The Hurt Locker,” which has dominated the awards picture despite the enormous commercial success of her ex-husband James Cameron’s “Avatar,” was chosen out of a field that included “Avatar,” Jason Reitman’s “Up in the Air,” Quentin Tarantino’s “Inglourious Basterds” and Lee Daniels’ “Precious.”

Bigelow and Cameron were widely considered the frontrunners for the award, which has gone to the eventual winner of the Academy Award for Best Director all but six times since the DGA began handing out honors in the 1940s. 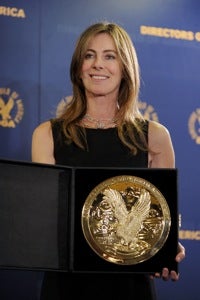 Afterwards, Bigelow called the award "extraordinarily gratifying and thrilling," but had trouble answering a question about how she felt to become the first woman to win the award.

"I suppose I like to think of myself as a filmmaker," she said, "and it’s truly extraordinary to be honored by this amazing directorial body."

After Bigelow’s win, show emcee Carl Reiner, who was hosting the awards for the 22nd time, pointed towards Bigelow’s fellow nominees and joked, "There are only four people in the room who are not happy about Bigelow." Cameron immediately shook his head, and insisted that he was indeed happy for her.

With wins at both last weekend’s Producers Guild Awards and the Directors Guild Awards, "The Hurt Locker" is now in commanding position in the Oscar race, although it would be the lowest-grossing film ever to win Best Picture.

The most significant victory for "Avatar" came at the Golden Globes, where it was named Best Film – Drama. But most critics awards, including the Critics Choice Movie Awards, have gone to "The Hurt Locker," which has also shown more clout in the crucial Hollywood guild awards. 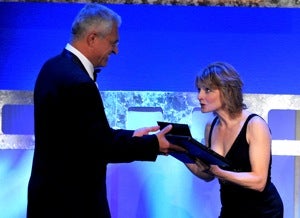 The DGA gave out one other award in feature films, for documentary. It went to Louie Psihoyos, director of "The Cove" (left, with presenter Jodie Foster).   Other nominees included Sacha Gervais for "Anvil! The Story of Anvil," Robert Kenner for "Food, Inc." and Agnes Varda for "The Beaches of Agnes."

Jason Weiner and Lesli Linka Glatter, the directors of "Modern Family" and "Mad Men," were honored for comedy and dramatic television series, respectively, while Ross Katz won the television/miniseries award for "Taking Chance."

The DGA show lasted for nearly four hours, although the program consisted of only 10 competitive awards and six honorary awards. Many of the speeches were lengthy, and each of the feature film nominees had a spotlighted moment during the show in which a film clip was shown, one or two actors from the film extolled the director, and then the nominee received a nomination plaque and delivered an acceptance speech.

Introducing Bigelow, "Hurt Locker" star Jeremy Renner praised her "confidence, keen attention to detail and acute perception." Bigelow then called it "the most important day in my professional life."

For his part, Cameron saluted his fellow nominees, and said he was struck by how "unutterably different" the five films were, and how foolish it was to choose between them.

Lee Daniels, who was introduced by Gabourey Sidibe, gave one of the funniest speeches of the night, but also paid serious tribute to the other nominees. "This awards season is a trip," he said. "To be welcomed with so much love and appreciation by the industry is an out-of-body experience for me."

Jason Reitman said he "stood on the shoulders" of his actors — two of whom, Jason Bateman and Anna Kendrick, presented him with his nomination plaque. But much of his speech saluted his father, director Ivan Reitman — who, he pointed out, has "never held" a DGA plaque, "and you should have!" 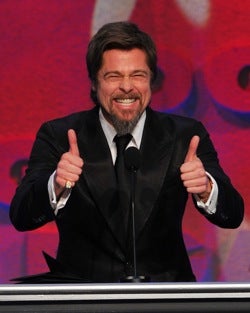 Brad Pitt, who attended with Angelina Jolie, introduced Quentin Tarantino with a very funny speech that began, "To pay homage to Quentin Tarantino’s ‘Inglourious Basterds,’ I have structured this introduction in five non-linear chapters." His remarks included an imitation of Tarantino’s look when an actor did an especially good take (photo, right), but Pitt went on to bemoan the fact that he never received the ultimate praise — a shout of "GENIUSSSSSS!" — although "Christoph did."

"If you happen to have forgotten what you love about movies to begin with," Pitt concluded, "you only have to spend one night with Quentin." A pause. "I don’t mean that, I mean an evening with Quentin. He is our greatest believer, and he is our champion."

Tarantino praised the DGA, an organization he has never joined, and said forcibly that he didn’t care who won the award. "I’m happy to be in this room, I’m happy to be here with all of you filmmakers," he said.

The DGA’s highest honor, the Lifetime Achievement Award, was given to director Norman Jewison.