A version of this article about Kathryn Hahn first appeared in the Actors/Director/Screenwriters issue of TheWrap’s Oscar magazine.

While making “Private Life,” director Tamara Jenkins and actors Kathryn Hahn and Paul Giamatti talked about “Waiting for Godot,” “Who’s Afraid of Virginia Woolf?” and “Dog Day Afternoon” — but you’d have to know what to look for to find echoes of those projects in Jenkins’ rich family story. The tale of a New York theater couple in their 40s trying desperately to overcome infertility issues and have a baby, the film is both comic and wrenching. Hahn and Giamatti are quietly gripping as a couple whose relationship is tested with each failed procedure.

“I loved the specificity of Tamara’s writing and the absolutely perfect human comedy of this marriage,” said Hahn, who suggests years of hurt behind each smile. “I had such deep and complete empathy for the characters in their struggle, in the longing and emptiness they were trying to fill.

“It felt like a chamber piece, and I knew it was going to be a deep dive. That scared me, but I was also turned on by the challenge of spending that amount of time in a marriage at this particular crisis point.” 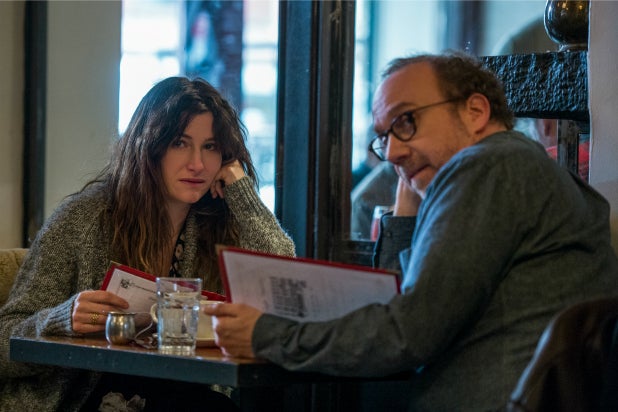 Before taking the role, Hahn flew herself to New York to meet with Jenkins — not for an audition so much as a bonding session. “We split a bottle of rosé and some charcuterie and cheese, and just sort of sniffed each other out,” she said. “We told stories and gossiped and joked and finished each other’s sentences. And then it became a waiting game to see if the stars would align in our favor.”

Giamatti came on board about six months later. The two actors had never met before, but Hahn said they immediately fell into the rhythms of a longtime couple. “It’s hard to even talk about our process, because so much of it was a soupy mystery of just being in the space with him and saying those words together,” she said.

“And the writing is so beautiful that much of the work was just trying to do justice to the language, and to show up and find each other. And to my great fortune, he was always there. I didn’t have to look anywhere but into his eyeballs.”

But the role was still a challenging one, because the character’s life is studded with disappointment. “Just like life, there are so many little highs and lows in the run of this movie, so many things to mourn, so many little deaths, that it was hard for me to not want to fall completely apart all the time,” she said. “The challenge was to keep it at bay, to hold it together.

“And Tamara was incredibly helpful in not wanting it to be maudlin. That was important to me, because it was hard for me to not want to lose my s— completely.”

And in case you were wondering, here’s why they talked about those other projects: “Waiting for Godot” because the couple puts their lives on hold trying to have a baby, Virginia Woolf because they have an imaginary baby in their minds and “Dog Day Afternoon” because they’re ordinary people pushed to extremes.