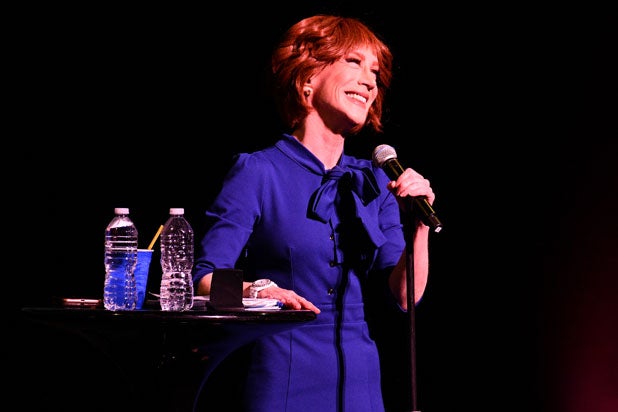 Kathy Griffin is getting her head back in the game. Brainstorm Media has acquired the documentary “Kathy Griffin: A Hell of a Story” and is partnering with Fathom Events for a one-night only theatrical release, the distributor announced Monday.

The documentary will play in theaters on July 31, and Griffin will join audiences for a live Q&A following the film.

“Kathy Griffin: A Hell of a Story” follows Griffin near the end of her stand-up comedy tour “Laugh Your Head Off,” where she discussed the photograph depicting the bloody, severed head of Donald Trump.

Also Read: Kathy Griffin: I Faced a 'Conspiracy to Assassinate' President Charge That 'Comes With a Lifetime Sentence' (Video)

The image, which she took in 2017 and intended as a joke, made her not only the scorn of the right, but it also got her blackballed from Hollywood and even resulted in an intense, lengthy federal investigation by the U.S. Justice Department and the Secret Service under conspiracy to assassinate the president.

“I am so excited to be announcing my first-ever theatrical release. I’m honored to be given the opportunity to showcase my comedy and the raw behind-the-scenes-footage of the last two years. The film pulls back the curtain for a gritty, unapologetic look at this era of cultural chaos and Trumpism. You’re going to hear things in this film you’ve never heard before- and it’s funny as hell. Join me in movie theaters on July 31st for an unforgettable and hilarious night,” Griffin said in a statement.

“As a longtime fan of Kathy Griffin, it is an honor to get to work on this film! Kathy’s story will shock and upset you, but more importantly it will make you laugh. Brainstorm is thrilled to partner with Fathom Events to bring this movie to cinemas nationwide, so that audiences can share in the experience of watching Kathy Griffin at her best,” Michelle Shwarzstein, VP Marketing & Acquisitions for Brainstorm Media, said in a statement.

Griffin has said previously that on her international tour talking Trump and America, she was detained at every airport she visited and is still facing an uphill battle in rejuvenating her career.

Troy Miller directed the film that premiered at SXSW. Griffin self-financed and produced the film herself. It’s also produced by produced by Donut Run Inc. and Dakota Pictures.

Variety first reported the news of the deal.