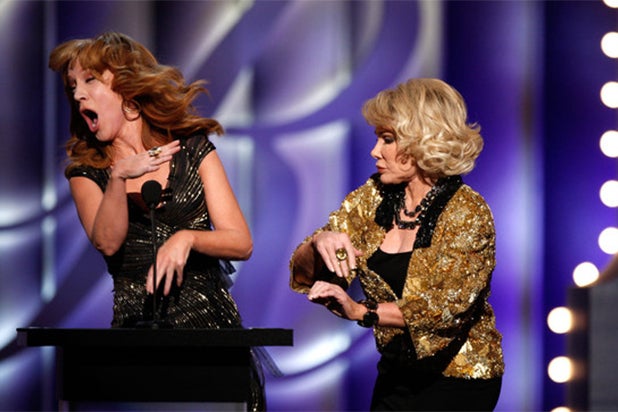 Kathy Griffin revealed E! had approached her after Joan River’s death and asked her to take over “Fashion Police” hosting duties.

“They did offer it to me,” she told Access Hollywood at an Equality Now event in Beverly Hills on Tuesday. “I don’t know if the situation is correct at this time for me or right for me at this time.”

“I really hope they continue in the spirit of Joan’s work,” she continued. “She brought a fearlessness and a brand of humor into our homes that we really need. … Somebody’s gotta be out there poking fun at the ridiculousness of all of this!”

The tweet came shortly after E! announced “Fashion Police” would continue without Joan Rivers, which quickly led to reports that Griffin might serve as her replacement. But, the network denied those claims.

“There are no further details to announce,” an E! representative told TheWrap. “Any speculation at this point is incredibly premature.”

Griffin’s representatives have not immediately responded to TheWrap’s request for comment.

Rivers, who created “Fashion Police” in 2010, died on Sept. 4 at 81, after a throat procedure stopped oxygen from going to her brain. Her daughter Melissa Rivers laid the groundwork for a possible wrongful death lawsuit in October when she hired lawyers to investigate the circumstances of her mother’s death.

Another possible replacements for Rivers that have been floated in the press include “Real Housewives of Atlanta’s” NeNe Leakes.

An E! spokesperson told TheWrap on Tuesday that no decisions have been made and that they’re looking at a wide field of candidates.