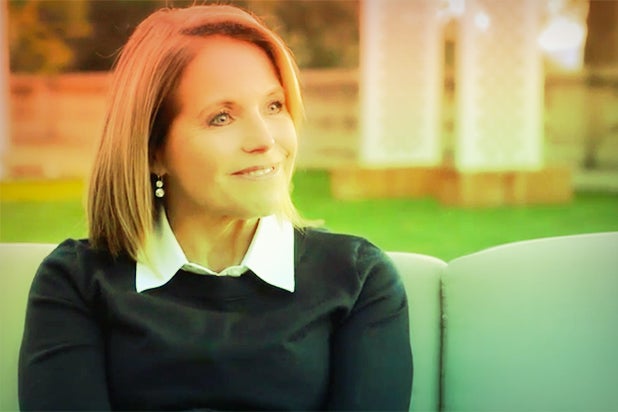 When Katie Couric tackled the issue of gender identity in 2014, it went down like a lead balloon.

An episode of her eponymous talk show featuring transgender entertainers and activists Carmen Carrera and Laverne Cox made headlines when Couric asked Carrera about the state of her “private parts.”

Couric was slammed for focusing on what many in the trans community believe is a personal matter. BuzzFeed called her interview “cringeworthy.” Salon dubbed her questions “invasive.”

“I’ve learned a lot since that show,” Couric told TheWrap during an interview about her upcoming documentary, “Gender Revolution,” which airs Monday on National Geographic. “I wanted to approach the topic with respectful curiosity.”

Ironically, she could have edited out the TV blunder  — avoiding the negative press altogether — but decided not to.

“That show was taped and I asked them to keep it and not excise that part,” Couric said. “I was willing to embarrass myself to help other people understand and make a point.”

Couric said she decided to take a “step back” and looked at the “big picture.” Her new two-hour National Geographic documentary explores everything from the difficulties facing the transgender community to places where social acceptance is growing.

And this time review are as good as they come. The Daily Beast called the film “compassionate” and  “incisive.” Canada’s Global News proclaimed “Couric’s gender journey is one we should all take.” And the Human Rights Campaign, the nation’s largest LGBT advocacy group, announced it’s honoring Couric for her “groundbreaking work” later this year.

“I wanted to be a proxy for people who are interested in the subject but wanted to be better educated about it,” Couric said. “And that included me.”

The Yahoo! anchor talked to us about her latest project, the new terminology she’s picked up during the filming, and the lesson she learned from a controversial eight-second edit in her gun documentary, which came under fire earlier this year.

What made you want to do a movie on gender?

I’m very interested in taking a step back and trying to look at the big picture when it comes to major social issues and cultural issues, and I noticed that something has slowly been happening, probably too slowly for the gender-non-conforming community that is hard for a lot of people to understand, and I wanted to be a proxy for people who are interested in the subject but wanted to be better educated about it. And that included me… I wanted to approach the topic with respectful curiosity, understanding that I wasn’t an expert, but I wanted to listen.

The last time you tackled this issue it ruffled a few feathers. Were you worried about taking on such a sensitive topic?

I’ve learned a lot since that show. The goal of doing the show when I interviewed Carmen Carrera was to keep in the question that I very insensitively and clumsily asked and use it as a teachable moment. Laverne Cox came on, and we had a whole conversation about why that kind of question is offensive. That show was taped and I asked them to keep it and not excise that part. I was willing to embarrass myself to help other people understand and make a point. It’s an extremely sensitive topic.

I tried to use my lack of knowledge as a learning device. I had never heard of the expression “deadnaming” [the act of referring to a transgender person’s birth name instead of their chosen name] before. “Woodworking,” [blending into society after transitioning] I had never really heard of. I tried to have an openness to learning with a desire to ask direct questions. It was a balancing act between trying to be direct and ask questions people at home would ask, but not be insensitive.

Many in the trans community are worried the Trump administration might roll back recent advancements. Was the political climate a factor in making this movie?

I’ve been quoting Dr. Oz a lot, which is unusual for me, but when I talked to him for his show, he said to me, “It’s hard to hate up close.” I think that’s so true and so profound.

You’d be pressed to find transgender reporters in broadcast news. Do you think the industry is doing enough when it comes to hiring trans people in the newsroom?

I think that’s a very good and important, interesting point. In my experience, I’m seeing many more gender non-conforming people working in companies and news environments and media companies, but on camera not so much, and that’s something to consider. But I think we’ve made great shows with shows like “Transparent,” “Orange is the New Black,” is on a CBS show. I do think that progress is being made, at least in the scripted arena, and I hope that possibly news organizations will follow suit.

Your last documentary, “Under the Gun,” came under fire over an eight-second pause inserted into an interview. Did you have more control this time around?

I was much more intimately involved with every edit and how the documentary was put together this time.