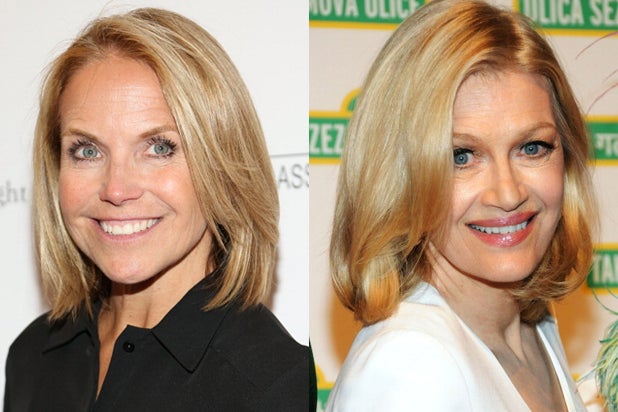 Katie Couric is prone to low blows according to “The News Sorority,” an upcoming book from Sheila Weller that follows the career ascension of Couric, Diane Sawyer and Christiane Amanpour. However, an individual close to Couric disputes the claims against the newswoman.

In one instance in Weller’s book (from excerpts published by The Daily Beast), Couric had once quipped that Sawyer had performed oral sex to further her career. When Couric learns Sawyer bagged an interview with a 57-year-old woman who gave birth to twins, Couric allegedly said of Sawyer, “I wonder who she blew this time to get it.”

Couric declined to comment for this story. A individual close to Couric, though, disputes the report and dismisses the book.

“It’s sad that‎ the author and her public relations team continue to rely on anti-feminist caricatures, misrepresentations and falsehoods in their desperate efforts to drum up interest in this book,” the individual told TheWrap.

Possibly in an effort to bring more attention to the book, The Daily Beast’s review of “The News Sorority” was published Wednesday, which also happened to be Sawyer’s final night on ABC’s “World News.”

The book, which will be released Sept. 30, doesn’t leave Sawyer and Amanpour unscathed. Here are four other outrageous book excerpts about the women:

1. Amanpour wouldn’t cave to her CNN bosses after 9/11.
Weller says then-CNN president Walter Isaacson insisted that Middle East reporters “skew their stories more favorably to Israel” in the wake of the terrorist attacks of Sept. 11, 2011. Amanpour reportedly responded by filing a critical report about Israeli destruction.

See video: Diane Sawyer Gets Nostalgic for Final Person of the Week Segment

2. Sawyer blasted the work of “Primetime” colleague Sam Donaldson after his return from prostate cancer surgery.
Donaldson did a physically taxing segment, but Sawyer didn’t like the result. Weller quotes an unnamed ABC News source as saying, “Diane called everybody and said, ‘That was a really terrible piece — let’s make sure it doesn’t happen again.'”

4. Sawyer is accused of masterminding Charlie Gibson’s “World News” departure.
“In the summer of 2009, Charlie had lost his momentum and Diane moved in for the kill,” Weller wrote. “Charlie told people that he was called into David’s [Westin’s] office and told, ‘You’re out.'”

Before penning “The News Sorority,” Weller wrote about legendary lady rockers Joni Mitchell, Carole King and Carly Simon in “Girls Like Us,” a novel in the process of being adapted by Sony Pictures.