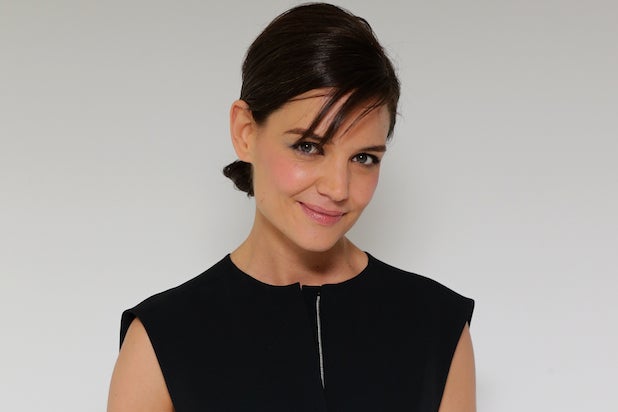 When Katie Holmes popped onto Hollywood’s radar in 1998 as lovable girl-next-door Joey Potter on “Dawson’s Creek,” many people didn’t realize that by that time, she had already worked with Ang Lee and Tobey Maguire on “The Ice Storm.”

Within the next two years, she teamed with Doug Liman on “Go,” Curtis Hanson on “Wonder Boys” and Sam Raimi on “The Gift.” Her more recent collaborators include Christopher Nolan (“Batman Begins”), Jason Reitman (“Thank You For Smoking”) and producer Guillermo del Toro (“Don’t Be Afraid of the Dark”) — all of whom most actors would kill to work with.

While Holmes took some time off to start a family with ex-husband Tom Cruise, the actress is back in a big way, with a flurry of projects on the horizon. Not only did she use her maternal warmth to win the prized role of Brenton Thwaites’ mother in the Weinstein Company’s adaptation of the beloved children’s book “The Giver,” which hits theaters this summer, but she also stars alongside William Hurt and Allison Janney in “Days and Nights,” a family drama inspired by Anton Chekhov’s “The Seagull.”

Additionally, Holmes recently wrapped Taylor Hackford and Richard LaGravenese’s ABC pilot, which is a modern day take on “Dangerous Liaisons.” No decision has been made regarding a series pick-up, but Holmes is the sort of young female star the network would love to bring into the fold.

More immediately, Holmes has “Miss Meadows” debuting at the Tribeca Film Festival on Monday, April 21. The film finds her bucking convention and playing against type as a vigilante teacher who falls for the town sheriff. In advance of the world premiere, Holmes spoke to TheWrap about the film, her career resurgence and her journey as a leading lady in Hollywood.

TheWrap: Tell us what “Miss Meadows” is about, and how you first got involved with the project.
Katie Holmes: I read the script about a year ago and got on the phone with [writer-director] Karen Leigh Hopkins. I thought it was a really quirky story and one that a lot of people could really connect to, along with this character. She’s a schoolteacher by day, but she also believes in being this vigilante and hurting those people who hurt children and others in society. It’s a bit of a stretch to take on a character who does this, but she’s also funny and I thought the script had a lot of charm. We shot in August in Cleveland.

There’s also a romantic element with James Badge Dale, correct?
Yes, he plays the town sheriff, so the fact that the vigilante is falling for the sheriff makes things complicated between them because he’s essentially looking for her, but doesn’t know it. My character has never fallen in love or experienced those romantic feelings before, so it was fun to play that.

Do you feel like today’s society has lost its manners in general?
I think Miss Meadows is one who has a very high standard of what manners are. She lives in a way that is of an older time period. Personally, I’m a fan of trying to have good manners, but she takes it to a different level, which I find to be kind of funny.

Tell me about working with Karen, because there’s been a flurry of news lately about Hollywood’s lack of female filmmakers and strong female roles, and this movie seems to be a great opportunity for both.
It was great fun to work with Karen. She wrote a beautiful script and was so collaborative before and during the shoot, which doesn’t always happen. She created an atmosphere that was very free and we had a great time. She’s a very creative talent and [I’ve encouraged her] to keep writing down her own ideas. We need to go with our instincts and create as much as possible, because this was a really rewarding experience.

Between this movie and “The Giver” and a couple of other indie movies, as well as an ABC pilot from Richard LaGravenese, your career seems to be undergoing a resurgence. How does that feel?
I had a wonderful time doing the pilot for Richard, and right now, we’re just crossing our fingers and hoping for the best. I’d done a couple of indies back-to-back, which allowed me to work with some interesting new filmmakers who are trying to create content that means something to them. It’s fun when it’s more personal because it makes you more invested —  you want to hold up your end of the bargain for them. So it’s been exciting and rewarding, and I’ve had a chance to play a lot of different characters than the ones I’ve played before.

I know, I can’t wait to see you playing a femme fatale. I mean, what was the last movie about a female vigilante — “The Brave One” with Jodie Foster? Did you look to that film or any others for inspiration?
“Thelma & Louise.” They weren’t vigilantes but they were two strong women and that’s such a great movie.

I’ll admit, I’ve been a fan since your “Dawson’s Creek” days so I’ve watched you come into your own as a leading lady over the years. What have you learned along the way?
I’ve had a wonderful time in my career, and because I started so young, I had the great fortune of working with people older than me. So I grew up watching and being on set with people who are more seasoned. I worked with Helen Mirren at 19 (“Teaching Mrs. Tingle”) and Michael Douglas at 20 (“Wonder Boys”) and then Robert Downey Jr. (“The Singing Detective”), so I felt very fortunate as a young person and tried hard to study how those people work. As you get older, you experience different things and open yourself up more and change as a person. I feel like you get the work you’re supposed to have at that time. I’m happy with where I am right now and the projects I’ve been able to do. I look at characters differently now because I have a better understanding of how to make a movie and how my characters fit in, as opposed to just hoping I do it right. My eyes are a little bit more open, and living in Manhattan has been inspiring, because you’re always around different walks of life. It’s a very enriching city to live in, and that feeds into the creative process.

Do you still keep in touch with your Dawson’s Creek co-stars and stay up on their new projects? Are you going to watch James Van Der Beek’s new NBC show “Friends With Better Lives?”
Absolutely! I mean, we’ve all scattered a bit, but we had such an intense experience at a young age and that bond is forever. I love them!

Also read: Jamie Foxx, Katie Holmes – and Colin Powell – Get Down to ‘Get Lucky’ (Video)

What about your “Miss Meadows” co-star Callan Mulvey? He just joined the “Batman vs. Superman” movie, so do you have any advice for him on joining the Bat-franchise? [Holmes played Christian Bale’s love interest, Rachel Dawes, in Christopher Nolan’s “Batman Begins”]
Callan is so talented. I just hope he has a great time. It’s an amazing franchise to be a part of.

When will you find out whether your ABC pilot is moving forward? And can you tell us anything about it? When I heard “modern day “Dangerous Liaisons,” I thought of “Cruel Intentions.”
Probably May. I loved “Cruel Intentions,” but that was more of a younger interpretation. This one is more centered on elite society in New York. I had a great time working with Melissa George and Rufus Sewell and Susan Blackwell and Taylor Hackford and Richard LaGravenese. It was a wonderful group of people. I think those characters are worthy of following and I hope people get a chance to meet them.

What’s next for you on the feature side?
“The Giver.” I was a big fan of that book as a kid, and it was great to work with Phillip Noyce, Harvey Weinstein and Meryl Streep for a minute. From what I’ve seen, I’m so excited – the movie looks so cool! It’s a great interpretation of this book that people have good memories of.