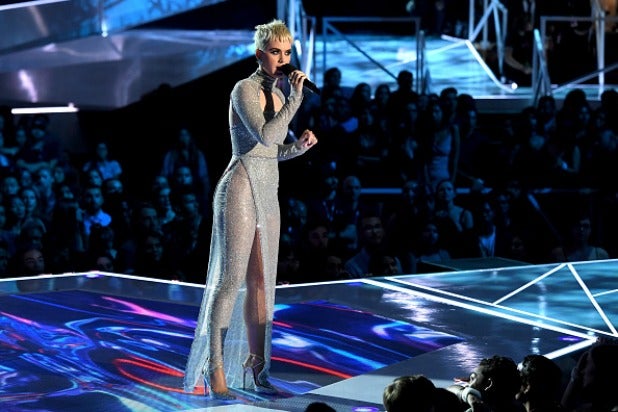 If you thought Katy Perry and Taylor Swift’s apparent feud could be put to rest during Sunday’s MTV Video Music Awards, think again.

Swift did not attend the VMAs ceremony that Perry hosted, but Swift’s music video for her new single “Look What You Made Me Do” dropped during the event. The video led to a variety of reactions, with some fans on Twitter suggesting that Swift was mocking Perry by appearing to dress up as her.

Shortly after the video aired, Perry was on stage delivering a comedic bit about tweets that she supposedly saved to draft but is now glad that she didn’t send them.

“Some people — wink, wink — could save-to-draft a lot more, don’t you think, guys?” Perry said in an apparent reference to Swift.

Perry then proved that she wasn’t too proud for a self-deprecating crack at her own album “Witness,” which was released earlier this year to less-than-stellar sales and reviews.

She quipped that one of her saved tweets was, “When Hillary Clinton becomes president, I promise to put out a timeless record that everybody loves.”

Perry has had plenty to say this year about her friction with Swift, who has largely remained mum about a feud.

Also Read: Taylor Swift Drops 'Look What You Made Me Do' Video, and Fans Are 'Confused' (Video)

“I’m ready to let it go,” the “Teenage Dream” star said in June about the tension. “I forgive her, and I’m sorry for anything I ever did, and I hope the same from her, and I think it’s actually ― I think it’s time.”

Check out some tweets below from VMAs viewers weighing in on Perry and Swift.

Katy we see your shade at Taylor and do not appreciate it…you're not cool. #VMAS

So apparently this is Taylor mocking Katy because she doesn't have a grammy. Wow Taylor really mature. #VMAs pic.twitter.com/aRGbD8Shwj

I can't tell whether Katy keeps throwing shade at Taylor or not. #VMAs

Between the Taylor video, Katy hosting, and Fifth Harmony, there's been a lot of powerful women resorting to shade tactics #VMAs