The news that turnaround expert Stephen Cooper has been brought in to replace Harry Sloan at MGM has apparently put a new glint in the eye of hungry Hollywood dealmaker Ryan Kavanaugh.

Waxword reported previously that Relativity Media’s backer Elliott Associates had been quietly buying up bonds from debtholders in an attempt to orchestrate a ‘forced bankruptcy’ of the company, in the service of a neat takeover. (I posted documents from the actual takeover plan here.) 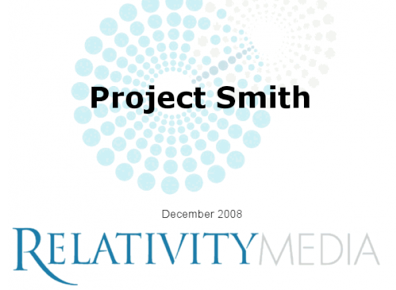 Now we’ve learned from an individual close to the plan that the buying, which stopped for a while, has recommenced and that Kavanaugh (via Elliott) has amassed as much as  $500 million in bonds – much more than the $200 million we previously reported – from among the 180 or so debt-holders.

Elliott has been paying about half of the face value of the bonds, which amount to a total of $3 billion in face value.

The scheme, which was devilishly cloaked as “Project Smith” in the documents we previously posted, is known in the finance world as a ‘prepackaged bankruptcy.’

If Kavanaugh can amass about two-thirds of the bonds, enough to have a controlling interest, he could essentially force the company into bankruptcy, get it quickly ratified by a court, and emerge immediately from said bankruptcy.

Elliott has said elsewhere that they’ve bought up the debt purely as an investment. Relativity has said they have no official connection to any of this. But the documents speak quite eloquently that this isn’t the case.

For all its financial troubles, MGM still has exploitable assets.

The 4,000-title library – including Bond films,  Pink Panther, The Thomas Crown Affair and many others — is a huge source of revenue, but Relativity financial analysts believe it can be marketed better by taking some titles off the marketplace and reissuing them strategically.

Despite the appointment of Cooper, Kavanaugh’s plan apparently remains the same as before: to oust current management, save some $80 million a year by cutting overhead drastically, restructure the remaining debt and either use what credit remained to the company to make films, or flip it for a profit.

“Do they need the most expensive building in Century City aside from CAA?” asked one person knowledgeable about the plan and Kavanaugh’s renewed interest. “They’ve got a great library. A good enough brand. And their foreign tv channels are fantastic.”

But Kavanaugh will face competition in this plan from Cooper, the turnaround veteran  who was brought in Tuesday to replace Sloan and restructure the company’s $3.7 billion debt.

Cooper will have a tough job. A $250 million interest payment looms early next year. Some analysts predict Cooper will try to convince debt-holders to convert their debt into equity in MGM. Let’s keep an eye on those 180 debt-holders; they hold the future of MGM in their hands.

and: Hey, Nikki: How’s That About Relativity and MGM?